At the Environmental Science and Chemistry Building at University of Toronto Scarborough, massive earth tubes that temper incoming air help to reduce the energy use. 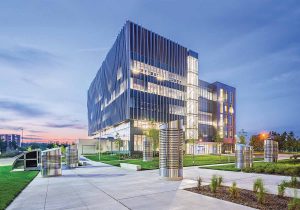 When the University of Toronto started to build its satellite campus in Scarborough in the 1960s, the brutalist architecture of its first new building caused a stir around the world. The John Andrews Building, named after its architect, has a pondorous interior of thick concrete walls and winding “streets” with deep balconies. In 1969 David Cronenberg used it to create the foreboding atmosphere of his black and white experimental film Stereo.
In the decades since other interesting structures have been added to the campus, which is clustered south of Highway 401 at Morningside Avenue in the eastern suburbs of Toronto.
Most recently the high-profile Toronto PanAm Sports Centre was built for the 2015 Games on the northern edge of the campus. And just next door to this large aquatic centre, another striking building opened in February.
The five-storey, 9,400-m2  Environmental Science and Chemistry building consists of laboratories on one side, academic offices on the other, and an atrium in between.
The exterior is distinguished on the laboratory side by a facade of undulating vertical aluminum louvres. These solar shading devices are just one of many features that make the building highly energy efficient. It has been certified LEED Gold, “which for a typical energy-hog laboratory building is no mean feat,” says Paul French of Diamond and Schmitt, the architects.
Elaine Guenette (Hopkins), P.Eng., project engineer with Smith and Andersen, who were the mechanical-electrical engineers, explains that they were asked to achieve eight LEED energy points. This score represents a 37% savings over the Model National Energy Code for Buildings.

Earth Tubes
One of the building’s most unusual features is a system of six “earth tubes.” These large 2-metre diameter concrete pipes are buried underground and draw air into the building from vertical aluminum intakes set into the landscaping outside. The earth tubes are sloped towards the building and buried 5 metres deep at their lowest point.
The idea is that as outside air passes through the tubes its temperature is moderated before it reaches the air handling unit that serves the office portion of the building.
Because the earth tubes vary in length from 20 to 30 metres long they are fitted inside with large semi-circular, fixed metal baffles to equalize the air flow through them. The baffles are also used to create turbulent air for more effective heat transfer. RWDI designed the quantity and location of the baffles with CFD modelling. A heat transfer calculation was also done to see how much difference the tubes would make to the air temperature.
“We found that in the winter and summer there are different amounts of heat transfer because the air-to-ground temperature difference varies throughout the year,” says Guenette. “We found that the temperature difference in the air after it has gone through the tubes is 20 degrees F at peak winter, and over the year it averages a difference of 7 degrees F.” The air handling unit can also bypass the tubes if the outdoor air is the right temperature.
An ultraviolet system is used to disinfect the incoming air as a safety precaution. Guenette explains: “The UV lights are ceiling mounted in a plenum that collects the air from all the tubes before it is drawn into the air handling unit. There is a safety connection with the door to the plenum such that when the door is opened, all the UV lights shut off.”
Earth tubes were installed several years ago in the Earth Rangers Centre near the Kortright Centre, northwest of Toronto, which provided a precedent. “We used a lot of their data to help size these earth tubes,” explains Guenette.
The tubes also double as a teaching tool, as the students can monitor their performance, along with the performance of the building’s other systems, as part of their environmental studies.
Geo-exchange system eases the lab chill
Wet and dry research and teaching laboratories occupy 60 per cent of the building, bringing high energy demands. These spaces require up to 10 air changes per hour, for example, which could make conditions very chilly  for the occupants. To compensate, the incoming air has to be heated to some degree.
The simultaneous heating and cooling of the incoming air into the labs is done efficiently through the geo-exchange (goethermal) system. A collection of 66 boreholes is drilled 600 feet deep below the building and is capable of providing 25% of the building cooling and/or heating load (210 tons of cooling, and 1350 MBH of heating). The heat pump, or geothermal chiller, can operate in heating mode or cooling mode, or in simultaneous heating and cooling mode, Guenette explains. The reheating of the air takes place at each lab and can be specifically controlled.

Saving unnecessary air supply
Further energy savings in the laboratories are achieved through the use of an air sampling system and low flow fumehoods.
The air sampling system tests the air for impurities and sends information back to the central building automation system. The BAS then determines how many air changes are required as a minimum in that space.
For example if no-one is using the lab, the air sampling system will indicate there are no contaminants and will direct that only, say, four rather than 10 air changes  are needed. The amount of air delivered to and exhausted from the space is then ramped down,” Guenette explains. “That’s significant because it’s 100% outdoor air that is being supplied that needs to be cooled, heated and humidified.”
The low-flow fumehoods require less air velocity to be flowing across the sash (opening): 60 feet per minute, compared to the more standard 100-120 feet per minute. The units were each individually tested to ensure they are safe to use, employing tests more stringent than the ASHRAE requirements.
The energy savings from these low-flow fumehoods are “huge,” says Guenette, reducing the exhaust air from each unit by half. There are over 100 fumehoods on the ground floor alone, and 30 or so on each of levels 4 and 5.
“We are also recapturing heat from the fumehood and general exhaust air and using it in a coil in the lab air handling units,” she explains.

Cascading ventilation system
The building has a cascading ventilation system that takes advantage of the central atrium. The offices are supplied with 100% fresh air, but this is returned into the atrium and then mixed with the incoming outdoor air for the laboratories.
The building automation system controls all the chillers, boilers, air handlers and other building systems. It can be accessed over the internet and will send out alarms when something needs attention.
A central condensing steam boiler provides humidification for the HVAC system, domestic hot water heating, and all the lab process requirements. It reuses heat from the condensate to mix with cold incoming water, thus saving energy.
As a lab building, it required many special systems, including a nuclear magnetic resonance machine, a high pressure steam system for autoclaves, a chemical resistant drainage and neutralization tank, a central compressed air system, and a reverse osmosis system.

Green roof, PV and lighting
The building’s other green features include a concrete roof structure that will support a future photovoltaic solar array, a green roof, and a cistern for collecting rainwater for irrigating the landscaping.
The lighting is all LED and there are occupancy and daylight sensors, so, for example, lights near the windows are turned off when not needed. The building has a lighting power density of 0.64, “which is 45% better than code, and still gives the light levels needed,” Guenette says proudly.