An office building in St. John’s, Newfoundland draws energy for its geo-exchange system from seawater that permeates the ground below the site. 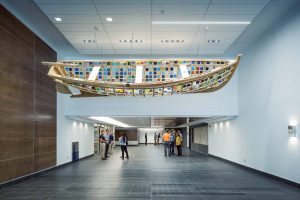 Located in the downtown core of St. John’s, Newfoundland, 351 Water Street was the first major office building to be constructed in the core in 25 years when it was completed two years ago. It overlooks the historic city’s harbour on one side and takes advantage of the seawater to heat and cool the building.
The 15,000-m2 structure consists of a six storey office, set above a six-level parkade and commercial spaces that include a restaurant and coffee shop. Stantec provided architectural, mechanical, electrical and project management services for the base building and tenant improvements.
East Port Properties, the building owner, has a reputation for being a leader in the development of sustainable buildings and saw the advantages of using the renewable energy source at its doorstep. Through a life cycle cost analysis and a hydrogeological research study of the seawater flow characteristics at the site, Stantec was able to recommend the use of an innovative seawater heating and cooling system —  the first of its kind in Newfoundland and Labrador.
The use of water from natural water bodies, such as large lakes, rivers and coastal waters as a source of energy in geoexchange systems to heat and cool buildings is an established engineering practice. However, this building sits approximately 20 metres from the harbour and the land between is crowded with utilities and other infrastructure.
In this situation a direct intake of seawater from the harbour was not an option, soheating and cooling 351 Water Street using seawater posed a challenge for Stantec and caused us to explore other options. The building sits on low lying, manmade land that was originally where wharfs lined the harbour and now consists of highly permeable geological material and fill. The natural movement of the tides flushes these soils with seawater from the harbour. We decided to see if it were possible to extract or discharge energy from the seawater that permeates the underground soils below the building. 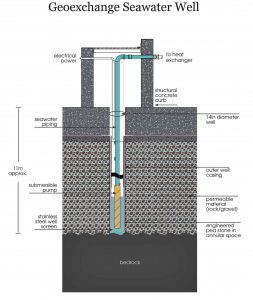 Research and testing
We began with research. Our team investigated the published and posted literature, but we could find no similar instance of this type of energy interface having been attempted. If we could demonstrate that the approach was feasible, however, it might open up additional opportunities to cost effectively heat and cool structures located on permeable materials adjacent to tidewaters.
We completed hydrogeological testing at the site to confirm whether vertically drilled wells could produce the required volume of water. A test well was drilled in order to carry out aquifer testing, water quality analysis, and to determine the long term sustainable yield of the well.
The results of our study confirmed the suitability of the site for use with this unique open loop system concept.
Geoexchange system design
The system installed consists of three engineered wells, any two of which can meet the design requirements and facilitate the absorption or rejection of heat from the harbour waters. We used a net present value analysis to provide the best balance of installed capacity relative to the peak design load. This approach resulted in the system being designed for 40% of the peak load, which will accommodate about 90% of the actual operating load conditions.
We drilled the wells straight down in order to access the relatively consistent temperature water from the harbour. The work involved drilling 35 ft. deep, 14 in. diameter holes to bedrock, inserting a smaller pipe with a stainless steel well screen, and then filling the annular space with an engineered pea stone. The outer sleeve was then partially pulled up, which allowed the naturally filtered water to enter the well.
The system produces approximately 500 US gpm of flow. Two wide mouth plate and frame exchangers isolate the raw seawater open loop from a closed source water glycol loop (35% propylene glycol) which either rejects or extracts heat from the seawater.
Depending on the season, the HVAC system’s heat recovery chiller source water loop either absorbs heat from, or rejects heat to, the harbour through heat exchange with the seawater wells. The system is extremely cost effective when compared to alternate systems based on life cycle cost. It also requires a minor amount of additional infrastructure relative to more conventional systems. The heat recovery chiller produces low temperature hot water at 140 degrees F and chilled water at 44 degrees F. The low temperature hot water is distributed throughout the building to low temperature hydronic baseboards, air handling unit heating coils, terminal reheat coils, and unit heaters as required. Conventional fin tube spans the perimeter of each floor in architectural enclosures.
Due to the corrosive properties of raw seawater, material selection was key. High grade stainless steel and plastic pressure piping was used for mechanical equipment and piping in contact with the seawater.

Energy recovery systems
and ventilation
In addition to the seawater heating and cooling system, the building’s HVAC systems recover energy from waste heat sources whenever possible, including from the building general exhaust and tenant server rooms. When supplemental heating is required – generally only on the coldest winter days – two 400 kW electric boilers provide additional heating capacity to the heat pump system.
351 Water Street also has superior indoor environmental quality. Each floor is equipped with two variable air volume (VAV) air handling units; one for perimeter zones and the other for interior zones. Relatively low supply air temperatures from the low temperature hydronic heating system provide increased ventilation effectiveness due to lower air temperature stratification. VAV boxes and modern controls are provided throughout, giving the occupants a high degree of control. In addition, spaces such as meeting rooms and board rooms are provided with demand-controlled ventilation, using CO2 sensors.
The energy model prepared for life cycle analysis predicted that the building would use approximately 35% less energy compared to more conventional designs. The Commercial and Institutional Building 2009 Survey from NRCan indicates that a typical large office building in Canada consumes 305 kWh per square metre. The annual energy usage for the first years of operation at 351 Water Street was approximately 200 kWh per square metre.