Unmanned aerial vehicles open up new vistas for surveying and photographing construction sites. They also can save companies time and manpower. 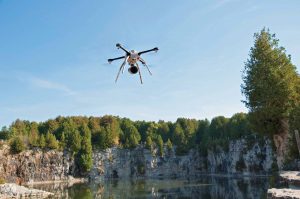 As the Edmonton Oilers’ new downtown arena arose from its subterranean foundations early last year, design consultants DIALOG wanted to visually showcase the construction progress of Rogers Place. So they took to the air, not with a helicopter or airplane but with something that looked very much like a toy.
It was in fact a remote-controlled drone, weighing a few kilograms and equipped with a GPS system and cameras. After lifting straight up, it flitted above the massive construction site for a few minutes. In the process, it captured remarkably clear, detailed video footage, which was posted on the company’s website and shown on local TV stations.
“A lot of exciting, large projects are being built in downtown Edmonton, and we wanted to help tell that story,” says DIALOG structural engineer and principal Jeff DiBattista, P.Eng. “A drone allowed us to get video and still photography from vantage points not accessible from the ground or from traditional aerial photography.”
In the public mind, drones are associated with two ends of the spectrum: armed military surveillance and hobbyists flying off-the-shelf units around, say, a park. Yet drones — or unmanned aerial vehicles (UAVs) —  are finding a wide range of engineering uses. They include surveying, mapping and inspecting in industries such as construction, oil and gas development, forestry, mining and agriculture.

An exciting time for branching out
“It’s a very exciting time. We’re constantly being asked about new applications,” says Stephen Costello, president of Sudbury-based Costello Utility Consultants. It recently launched affiliate company AirVU UAV Solutions. “I think UAV use will be routine in five years. I’m convinced it will change the way engineering work is done.”
A licensed pilot, Costello decided to combine his aerial hobby with his consulting engineering work. So about a year ago, his firm bought its first UAV and flew some 60 commercial missions.
“We just thought, why not put the two fields together and gain a competitive edge,” he says. “We are using this UAV technology to do our core engineering work better, faster and cheaper.”
The firm’s clients to date are primarily Ontario electric utilities with high-voltage infrastructure such as substations, power lines and distribution networks. AirVU uses its UAV, for example, to easily and safely inspect hard-to-reach distribution circuits in rugged terrain. Attaching infrared sensors allows engineers to readily detect overheated electrical connections in need of repair. And surveying software can produce detailed 3D models of substations, accurate to about one centimetre per pixel.

Surveying in much less time
Consulting engineers McElhanney operate three UAVs, which are particularly active in surveying small oil and gas sites in northern Alberta. “It’s another tool we use when it makes sense, especially from a cost-effectiveness perspective,” says Dan Tresa, McElhanney’s Vancouver-based branch manager of mapping services. “To get an aircraft from Edmonton or Calgary to a northern site is going to cost at least $10,000 to start. By contrast, a drone transported from a field office in the back of a truck can typically do the job for under $3,000.”
Because of their small size and weight, UAVs can usually be loaded, deployed and operated by one person. Recently, a single surveyor with a drone mapped an entire Manitoba dam construction site, compared with the 14 people normally needed for a land-based survey.
Once it’s unloaded, a UAV can be launched in minutes. “If you’re inspecting a cell tower, you can be up, take your pictures and back down in 20 minutes, which might be less time than it takes to just put on fall-arrest equipment for a manual inspection,” says Costello.
A hovering UAV offers unique perspectives unavailable to conventional aircraft. An attached camera with 30-times optical zoom can, for example, inspect threads on bolts, read serial numbers or detect rust. Because drones fly low and slow, often at consistent heights, they can capture many data points and produce detailed, accurate maps.
Using UAVs to inspect confined spaces or survey potentially hazardous environments like a quarry or tailings pond is generally much safer than sending in workers on foot. “There’s growing interest in their use on construction sites, because you don’t have to send people over obstacles or up structures to do inspections or environmental reporting,” says Andrea Sangster, senior marketing manager with Aeryon Labs.
Based in Waterloo, Ontario, Aeryon has been manufacturing small unmanned aerial systems (sUAS) since 2009. Its latest version, the SkyRanger, weighs 2.4 kilograms (without payload), measures 102 centimetres in diameter and 24 centimetre in height when deployed. Prices for the machine start at about $65,000.

Abiding by the rules (and the lack of them)
While any commercial UAV can be operated by one person, a second person is legally required as a spotter. Indeed, Transport Canada, which regulates the drone industry, stipulates that all flights must remain within the line of sight of its operators. For this reason (along with limited battery life), UAVs are not good candidates for surveying long, linear features such as pipelines or sprawling sites.
In the U.S., commercial drone operators are required to be licensed pilots. No such restrictions currently exist in Canada, though Costello’s company does it voluntarily, in part so that operators can make radio contact with air traffic controllers should the need arise.
Most commercial UAV use does require a Special Flight Operating Certificate (SFOC) from Transport Canada. The permits can take weeks to obtain, at least for the initial permission.

Flying into the future
To help construction companies prepare for the UAV future, Canadian Construction Innovation (CCI) recently published a booklet covering such issues as drone costs, sizes, uses, peripheral equipment, legal requirements and insurance coverage. “It gathers a lot of information and will hopefully help educate people as drone use increases in the industry,” says CCI President Pierre Boucher.
Drone use has exploded in recent years, with Transport Canada permits for commercial flights rising from 66 in 2010 to 1,672 in 2014. That boom shows no signs of abating, as operators continually find new applications for these little flying machines.
In Japan, for example, Komatsu is developing robotic vehicles that can be guided around sites by drones. And a Swiss firm is working on drones equipped with cable dispensers that can quickly weave lightweight tensile structures in the air.
Clearly the sky is the limit.cce

Bill Corbett is a freelance writer based in Calgary.