Over 100 schools in the Calgary Board of Education are having their building automation systems revamped and put under central control, but the buildings are diverse and each requires its own BAS logic. 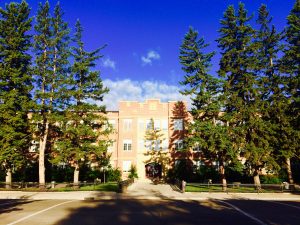 From the August-September 2016 print edition, page 23.

A comprehensive retrofit of the building automation systems (BAS) at the Calgary Board of Education, Alberta’s largest school board, is taking place. Expected to be completed in 2018, the project will upgrade the systems of 102 schools and centralize them onto one single BAS platform.
The process started in June 2014 when the Board issued a public request for proposals in search of an engineering company to design and implement energy conservation measures pertaining to building automation systems. Ecosystem, a complete design-build and energy performance contract firm, was the winning bidder. Upgrades have already started and 38 schools will be on one central BAS by the end of this year. Between 45 and 50 schools will be added in 2017, and the remaining schools will be completed in early 2018.
A building automation system is a type of direct digital control (DDC) processor-based system and includes components such as: inputs (e.g. temperature sensors); outputs (e.g. relays to start a heater); and the processor, also known as the controller. The controller hosts the control logic, or the brain of the BAS. This logic can be pre-written by the controller manufacturer, or customized by the BAS programmer. With most BAS systems, the customized logic is often only limited by the imagination of the programmer.

Programming for 102 unique buildings
The 102 buildings in the project are made up of 74 elementary schools, 16 junior high schools, 11 senior high schools, and one office building.
The schools vary in size and age: Crescent Heights High School was built in 1915, while Somerset School and Valley Creek School were built in 2003. About 80 of them are less than 5,000 square metres in area, but there are exceptions to the norm. The Scenic Acres School has an area of only, 1,432 square metres, while Crescent Heights High School has an area of 29,208 square metres. The ages of the equipment vary as well. For example, while the majority of the boilers were installed between 1955 and 1975, Altadore School has a boiler that was installed in 1952, and Sunalta School’s boiler was installed in 2005. Almost 30 schools are on steam networks and the remainder are on hot water networks.
Given that each school is different, the BAS logic for each school is unique. Ecosystem started the project with several BAS logic templates, but modified and customized them to appropriately address each school’s unique needs and challenges.
A huge advantage for implementing the Board’s wide-ranging system, which covers a total of 584,900 square metres in buildings spread out all over Calgary, is the ability to use the internet to remotely access the BAS from any of the schools. In day-to-day operations, it allows a controls technician to troubleshoot an issue at a particular school and program a change to the control logic; a building operator to check on the state of his building; and a facility manager to monitor the building’s energy performance and benchmark it against other schools — all without driving to the actual site.

Accessing the BAS
Each school has its own controller unit that connects to the central BAS. The central BAS is located in the server room of the Sherwood School, and the Board has the capacity to manage a maximum of 500 schools on its network. Access to the system is tightly monitored by the school board’s IT department.
Reusing old, functional equipment
In many retrofit or upgrade situations, it is common to have an old pneumatic system that needs to be integrated into a new DDC-style BAS. This is the case in this project. The schools were controlled using mainly pneumatic systems and mechanical timers to schedule the equipment and maintain the required ventilation rates and temperature levels.
Pneumatic controls are generally robust and long-lasting, but they use a lot of energy and require maintenance. Working with the school board’s building operators and controls technicians, Ecosystem was able to reuse some of the pneumatic end-devices, such as damper actuators and heating and cooling valve actuators, instead of sending them to a landfill. Devices that translate electronic signals to pneumatic signals were installed to integrate the old system into the BAS.
Group scheduling
Upgrading multiple control systems into one single BAS brings multiple benefits. Similar equipment can be grouped to share common schedules for ease of editing. For example, as the 74 elementary schools are unoccupied in the summer, the BAS can turn off the heating network, cooling network, and ventilation systems, all at once.

Reset curves, optimal starting,
and other strategies
The project involves implementing a number of other strategies. For example, the central BAS will use reset curves. Many boilers are set to deliver heat at 180°F or higher. A reset curve changes the desired temperature of the heating water based upon the outside temperature, making the boiler setpoint lower when it’s warm outside, and conversely higher if the outside temperature is low.
The BAS can also “learn” from experience. Using an algorithm called Optimal Starting, the BAS controlling an air handler at a particular school can predict how much time the fan would need to start to reach appropriate temperature in time for occupancy. For example, if a classroom is to be occupied at 8 a.m., the algorithm would look at the history of that system and may determine that the system would need to start at 7:22 a.m. to have the classroom conditioned in time.
Variable frequency drives (VFDs), which control pump or fan motors, are also being installed to manage energy usage and costs. Many pumps are actually oversized for typical applications because they need to deliver for the worst case scenario. A chilled water pump needs to be sized to deliver enough cooling on the hottest day of the year. However, these conditions are not the norm and as such for the majority of the time the pump is working (and consuming) much more than required. A VFD can vary the speed at which the pump is rotating and as such vary the amount of cooling the chilled water pump is delivering and dramatically reduce the energy use. The relationship between the electricity consumed and the speed at which the pump is rotating is a squared or even cubed curve. For example, a VFD at full speed (100 per cent) will obviously use 100% of the electricity. However, a VFD running at 80% of full speed may only consume slightly more than 50% of the electricity.
Equipment staging is another energy saving strategy being implemented. The BAS programmer can write sequences for a particular building using the most appropriate piece of equipment for the task at that time. For example, instead of having two boilers of equal size that are each capable of providing the necessary heat for that building (redundancy requirements often call for this), a smaller, more efficient boiler that is sized closer to the typical heating load could be added. The BAS will use the smaller boiler most of the time, and when it senses that there is not enough capacity, the larger boiler will be used.

The human factor
Implementing a BAS retrofit at 102 schools requires close collaboration and careful planning. Before starting work at every school, Ecosystem meets with the principal and key staff to present the project, explain the benefits, and outline the actions that will take place. Concerns are addressed and issues are clarified. “It is important that our facility operators and controls technicians have a sense of ownership of this project,” explains Earl Badger, P.Eng., Calgary Board of Education environmental projects coordinator. “The most intelligent BAS can still fail when it does not have the buy-in and support of the staff. Therefore, Ecosystem is providing staff training so that a seamless transition can take place once the project is completed.”
“Overall, all parties have demonstrated excellent teamwork,” adds Annie-Claude Thibault, P.Eng., Ecosystem’s construction manager. “We know the technology but the CBE staff know the buildings best. As a result, we listen to and seek advice from the CBE staff to ensure that our BAS programming addresses their buildings’ needs.” cce