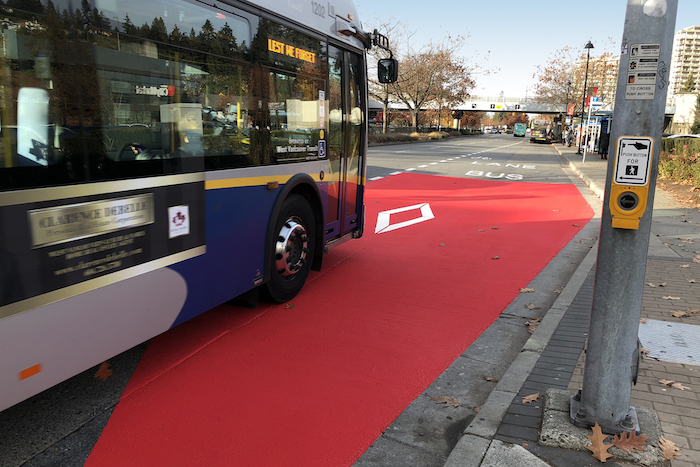 TransLink’s RapidBus program, which aims to improve the frequency, speed and reliability of public transit across the Metro Vancouver region by extending the connectivity of the SkyTrain network, comprises more than 60 km of bus priority infrastructure, with more than 120 stops across 10 communities. It also involves another 40 km of improvements to existing transit corridors.

“The program plays an important part in connecting the region through high-quality bus service,” says Jeff Deby, TransLink’s manager for the program.

The bus corridors run through urban, suburban and highway environments—one design would not fit all. 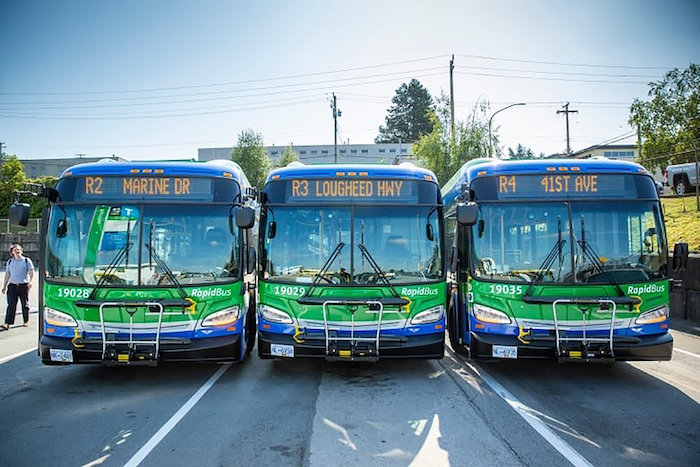 Working within constrained rights-of-way and a tight timeline, the team needed to direct design attention in a way that minimized conflicts with existing utilities and infrastructure. The RapidBus corridors run through dense urban, evolving suburban and regional highway environments, so one design would not fit all.

The team used a combination of data analysis, corridor-level traffic simulation, intersection-level micro-simulation and professional judgment, based on the conditions, risks and complexity at various locations. The focus was on determining the most feasible, cost-effective changes to the transportation network that would reduce delays for transit users. The team used PTV Vissim and Aimsun traffic modelling software, with visual simulation outputs built specifically for this project, to help determine the best design options.

The accelerated schedule was required to meet TransLink’s commitment to launch four of five RapidBus corridors in parallel by January 2020, followed shortly thereafter by the fifth. A 17-month construction period began in early 2019 and ended after the completion of all five corridors, i.e. in mid-2020.

Designs had to comply with each municipality’s standards.

The design team worked with 10 road authorities in the Metro Vancouver area, including the provincial ministry of transportation and infrastructure, and the University of British Columbia (UBC). Ongoing co-ordination during construction allowed for seamless corridor integration across a wide geography, where design efforts had to comply with each municipality’s standards.

The team also adapted quickly to evolving conditions on-site and engaged stakeholders in approving roadway, structural, electrical and utility design changes after in-house engineering analysis. The project had to accommodate, where possible, adjacent public and private-sector projects, including allowances for future roadside projects, such as local developments. 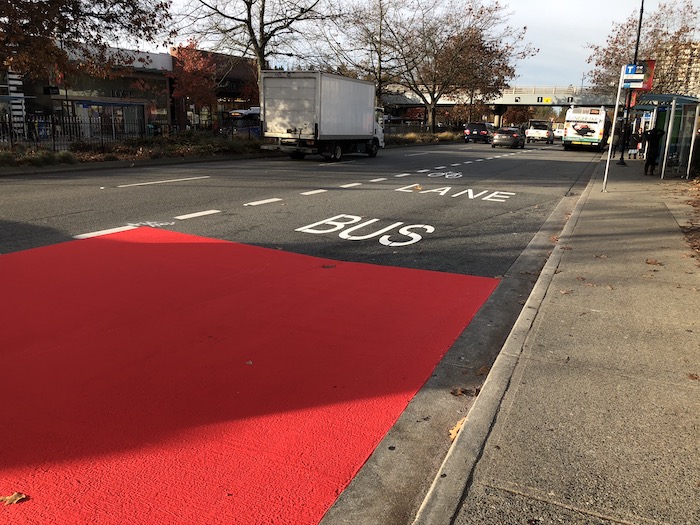 The new RapidBus corridors resulted in faster travel times, saving tens of thousands of person-delay-hours for all road users during peak periods. These savings were achieved through a diverse arrangement of transit priority measures, each tailored to suit local stakeholders’ preferences and tolerances.

The design team ran its model through various simulations, based on different scenarios for corridors on Marine-Main (using PTV Vissim), Lougheed (using Aimsun) and UBC/41 (using Trafficware‘s Synchro and Simtraffic, as well as for all the corridors). In total, the model predictions showed a reduction in trip time of 20% in comparison to conventional bus travel along the corridors, equivalent to saving 10 to 25 minutes.

While RapidBus is primarily a transit project, the corridors also help promote active transportation. The project has added 40 km of new and revitalized cyclist lanes within the 21 municipalities in Metro Vancouver, including new, modernized, fully illuminated multi-use pathways. The overall length of bikeways in the region tripled from 1,700 km in 2009 to 4,600 km in 2019 and the RapidBus project is an important contributor to this achievement.

The design team addressed immediate requirements to launch the new service in January 2020, while also planning for future incremental improvements to further upgrade the corridors during additional implementation phases to follow. The success of this project can be attributed in part to the extensive, complex multi-jurisdictional engagement co-ordinated by the consulting firms through all phases of planning and delivery.

Alice Zhao is an engineer-in-training (EIT) with WSP in Canada. For more information, visit www.wsp.com. This article originally appeared in the January/February 2022 issue of Canadian Consulting Engineer.