HVAC in the age of COVID-19

Ventilation could be made more effective for commercial and institutional buildings with partial occupancy. 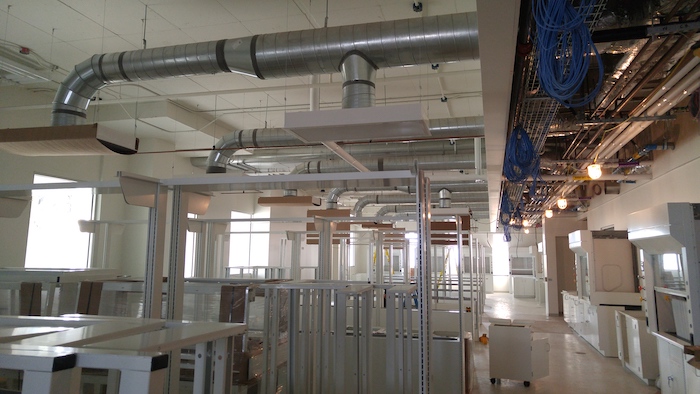 The COVID-19 pandemic has forced a rethink of how buildings are operated. Growing evidence of airborne viral transmission, for example, compelled engineers and researchers to investigate the sufficiency of current heating, ventilation and air-conditioning (HVAC) systems for safe operation.

The Data-Driven Building Operation and Maintenance (DBOM) research group at Ottawa’s Carleton University, for one, conducted a series of investigations. Its efforts highlighted several shortcomings of current building ventilation configurations and practices and provided recommendations for improvement.

The investigations were conducted to answer the following questions.

1. Are we supplying adequate outdoor air for building occupancy?

To evaluate supply of outdoor air, the group analyzed occupancy and ventilation rates as measured from a floor of a building at Carleton. The floor’s main spaces are served by two air handling units (AHUs), with variable air volume (VAV) terminals at the zone level.

Using the operational data, the group calculated per-person outdoor airflow rates in L/s and found the outdoor air requirements—as per ASHRAE Standard 62.1, Ventilation for Acceptable Indoor Air Quality—were not being met during many occupied hours in almost all zones (see Figure 1). 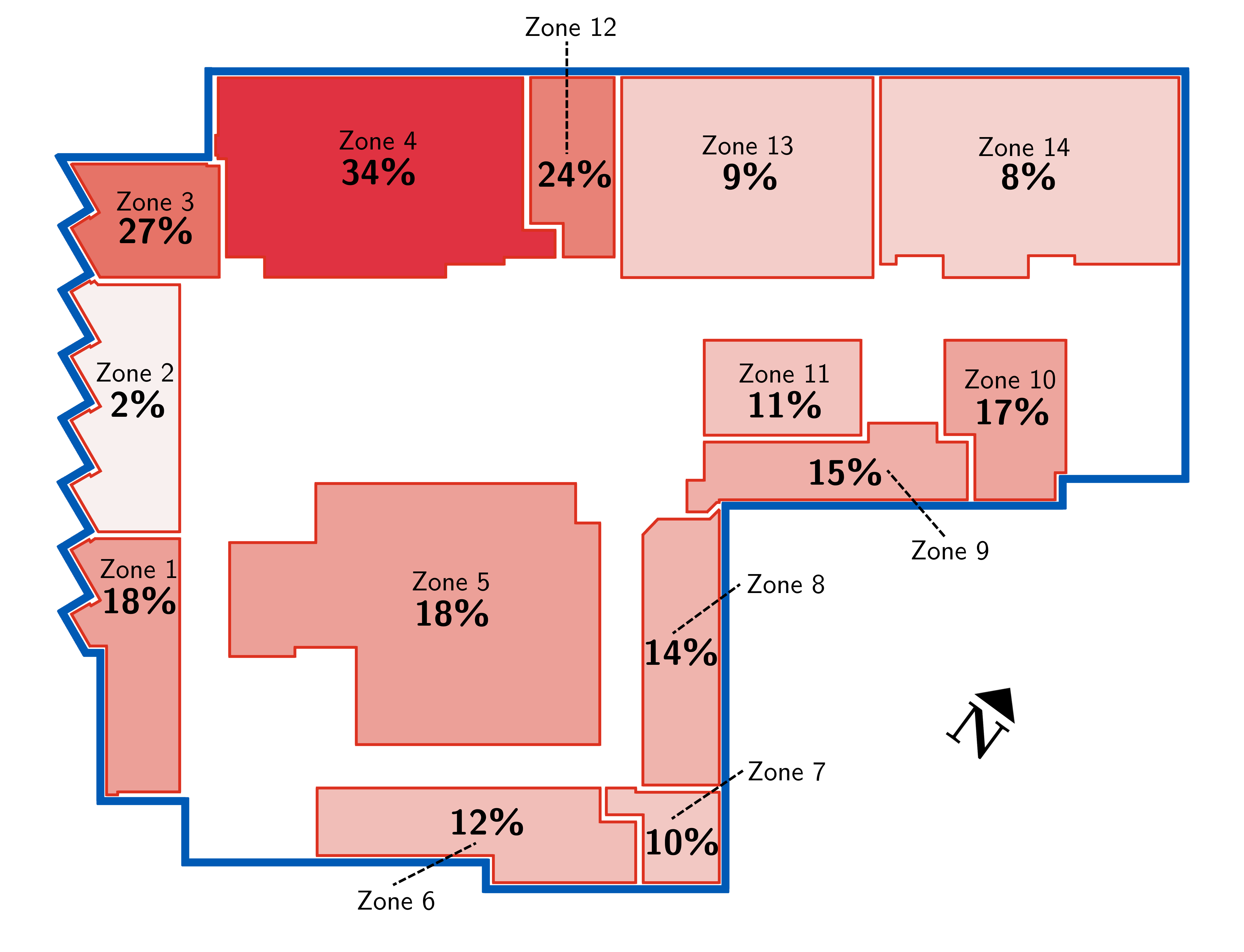 In zone 4, for example, ventilation requirements were not met for about one-third of the occupied hours, representing a serious indoor air quality (IAQ) issue. A thorough investigation revealed the root cause of this issue was how the VAV terminals were controlled based on thermal loads, not on occupancy or IAQ. In other words, zones with high thermal loads (e.g. from solar gains) would demand higher volumes of ventilation air (coupled with heating and cooling in VAV AHU configurations) to maintain temperature setpoints, even if these zones were unoccupied or lightly occupied (e.g. zone 2 in Figure 2). 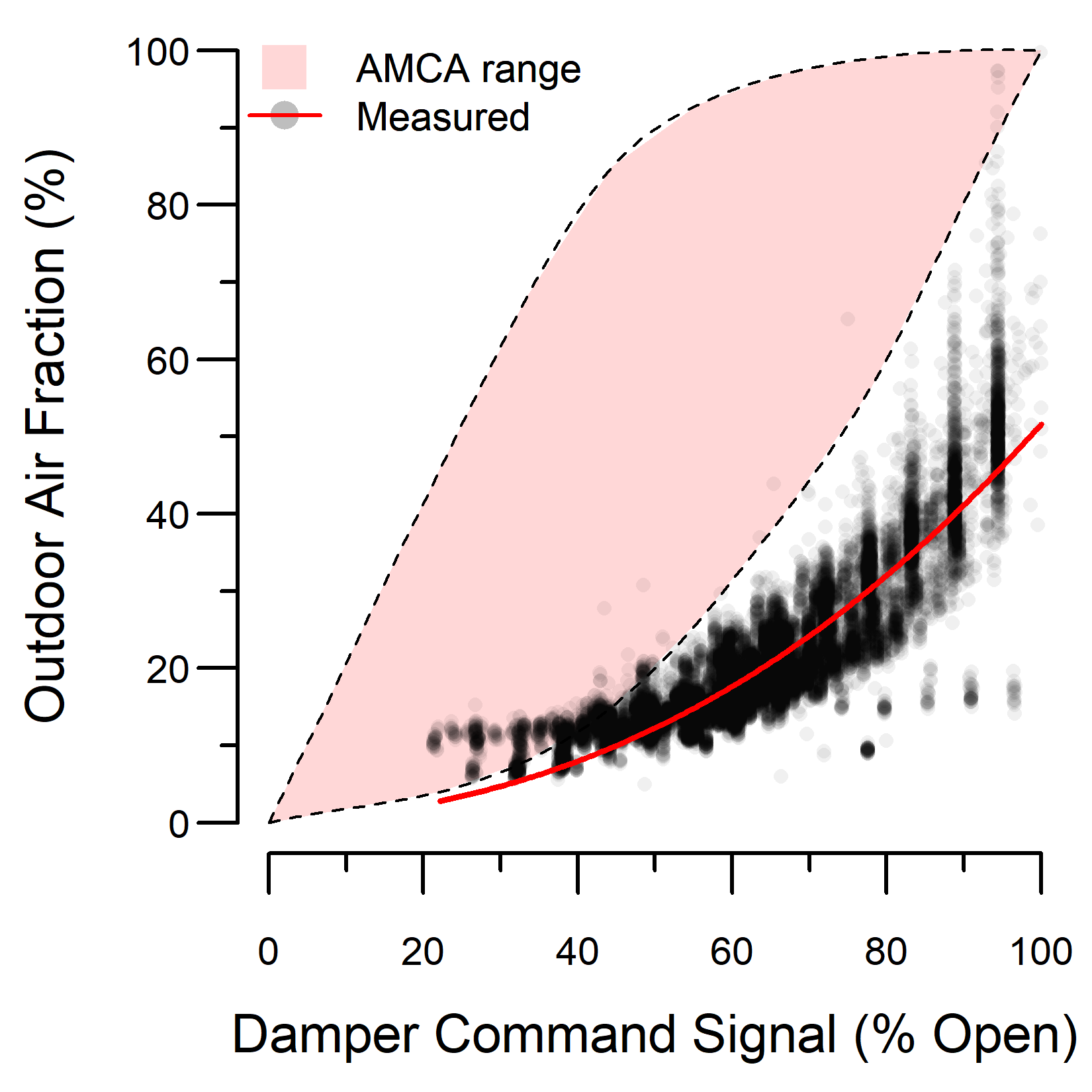 2. Do we know how much outdoor air our buildings’ HVAC systems admit?

The volume of outdoor air entering a building through an AHU is typically assumed to have a linear relationship with the damper command signal or, at best, is assumed to fall within the range established by the Air Movement and Control Association (AMCA), as shown in Figure 2. The DBOM group, however, found the relationship between outdoor air and the damper position signal was far from being linear or even within the AMCA range.

A building’s outdoor air intake can be far lower than assumed, supplying too little air per occupant in many existing buildings and negatively affecting their IAQ. The reliance on simplified assumptions is driven by a lack of instrumentation to measure the actual amount of outdoor air.

The flow rate for air should be verified at each space within a building.

Although many building management professionals (e.g. operators) solely rely on such assumptions or struggle to estimate the amount of outdoor air admitted to the building, the fraction can be easily estimated using available data from most building automation systems (BASs), such as air temperature, carbon dioxide (CO2) concentration or air enthalpy (i.e. the thermodynamic product of volume and pressure).

The percentage of outdoor air (%OA) can be calculated at each time step using the formula, ‘%OA=(Xma-Xra)/(Xoa-Xra),’ where X can represent CO2 concentrations, air temperatures or air enthalpies and the ‘ma,’ ‘ra,’ and ‘oa’ subscripts stand for mixed, return and outdoor air streams of an AHU, respectively.

If trend data is not available for Xma, after filtering out the time steps when heating and cooling coil valves are open, %OA can be approximated by assuming Xma ≈ Xsa, where ‘sa’ stands for supply air. 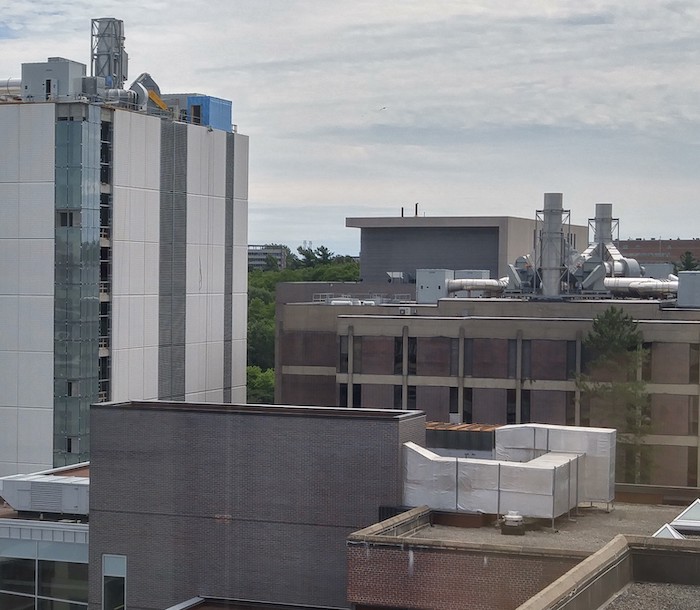 A building’s outdoor air intake may be far lower than assumed.

3. Are we receiving the intended volumes of ventilation in building spaces?

Another major issue is whether or not a building space is actually receiving the designed ventilation volume of air.

The supply of ventilation can be affected by several factors, including hard and soft faults in zone-level HVAC equipment, such as VAV systems. Faulty control logic, stuck dampers and faulty airflow or pressure sensors can lead to too little or too much ventilation. For this reason, verifying the flow rate at each space is a recommended practice, as it helps to detect and diagnose malfunctioning VAV systems. 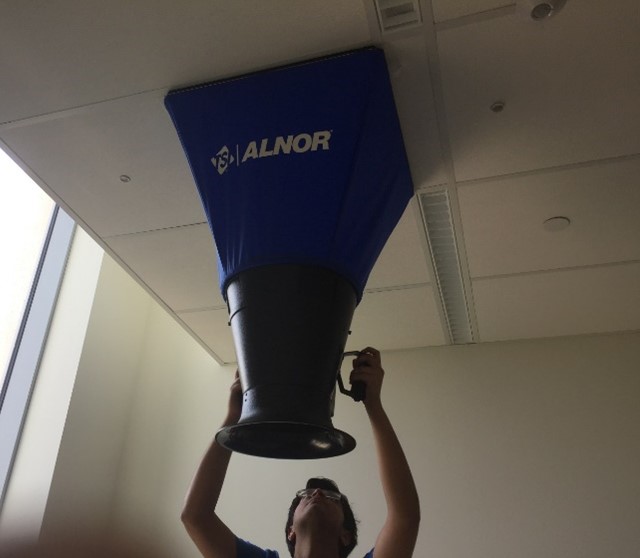 4. Are we supplying outdoor air in an energy-efficient manner?

When the DBOM group examined both supply airflow rates and supply air pressures, the operational data in many cases revealed ventilation was being supplied at a high level of pressure no matter the airflow rate. Exerting high pressure to supply low volumes of air against semi-closed dampers consequently requires more energy.

Figure 4 indicates a wide range of air volumes (2000-7000 L/s) were supplied at similar supply pressure (∼250 Pa). This observation indicates lower airflow rates could have been supplied at a lower pressure (i.e. at a reduced supply fan speed), which would be a more energy-efficient practice, considering the significant portion of electricity consumption the supply fan motor represents in operation.

Another form of energy inefficiency in current practice is supplying ventilation based on zone thermal loads (i.e. ventilating with conditioned air to maintain indoor temperature setpoints). This practice wastes energy on the unnecessary ventilation of partly occupied or vacant zones.

Zone-level DCV offers an energy-efficient alternative, regulating the supply of ventilation when and where it is needed and thus ensuring proportional distribution of the ventilation to the zones based on their occupancy. It is preferable to conventional AHU-level DCV based on the CO2 concentration of return air, which may result in chronic underventilation. Merely trying to control the average CO2 concentration below a setpoint may not represent the needs of densely occupied spaces.

5. Do we know the maximum allowable occupant capacity of our building spaces?

Considering the previous questions is key to determining the maximum number of people who can safely be accommodated in a given building or space. Occupancy will vary over time and across zones and can be far from design assumptions.

Figure 5 compares the ventilation system design capacity with the seating capacity of a university building floor. There is clearly a mismatch between them. Determining zones’ maximum allowable occupant capacities, based on ventilation design capacity, is fundamental for safer operation of a building, particularly in critical situations such as the COVID-19 pandemic. This information can be used to limit the number of occupants per zone and to support building management teams in planning for future upgrades and retrofits (e.g. upsizing zone-level VAV systems). 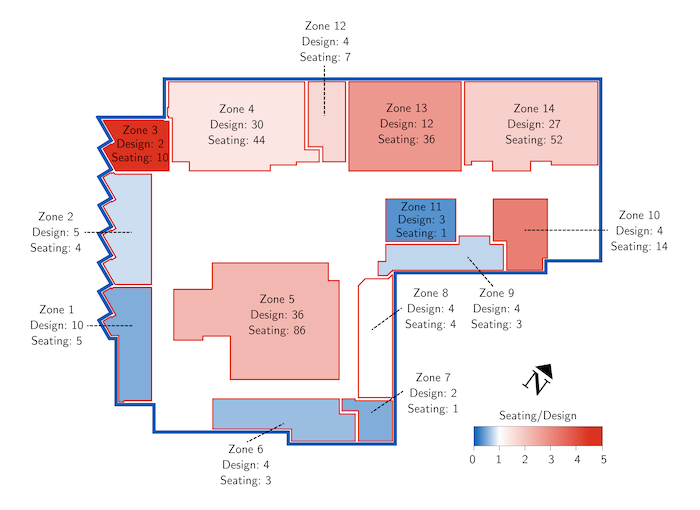 Lessons from the pandemic

Many issues and practices that influence the efficacy of building ventilation have been brought to light during the COVID-19 pandemic, based on observations and operational data analysis. The issues include a lack of proportional distribution of ventilation to building occupancy; a lack of accurate data on the volume of admitted outdoor air; a failure to supply the intended volume of ventilation air to spaces, due to hard and soft faults with zone-level systems; energy-inefficient supply of low volumes of air; and a poor understanding of the maximum allowable occupant capacity of a given space.

Occupancy will vary and can be far from design assumptions.

Solutions include the occupancy-based zone-level DCV; the use of BAS data to calculate the outdoor airflow fraction at each time step; measurement and verification of airflow rates at each zone; adjusting supply fan pressure to avoid pushing air towards closed dampers; and limiting space occupancy to ventilation capacity.