Award of Excellence: Giant Mine Remediation

“As part of the remediation of one of the worst contaminated mining sites in Canada, this project in Yellowknife, NWT involved stabilizing underground voids and openings that were posing a safety hazard. The really impressive aspect was the creative use of the tailings materials on site to fill the voids and create barricades.”– Jury 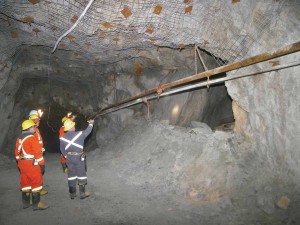 The Giant Mine Remediation project aims to clean up one of the most contaminated and highly publicized orphaned mine sites in Canada. The remediation of this large mine site which operated outside Yellowknife, N.W.T. between 1948 and 2004, will realize innumerable social benefits when the work is eventually completed.
As part of the remediation, Golder Associates was asked by Public Works and Government Services Canada/AANDC to help stabilize underground openings at the site.  An assessment of geotechnical hazards had showed that some portions of the underground mine posed an unacceptable risk of collapse, creating physical dangers to workers and the public.
A collapse could also lead to surface water infiltrating the contaminated underground workings. Over time, such events would jeopardize the current overall mine remediation plan, including the re-freezing of the arsenic trioxide vaults. Water treatment costs would increase substantially and Great Slave Lake could eventually become contaminated.

Tackling the problem
Golder extensively analyzed the complex underground mine workings to prioritize which voids required stabilizing. They developed mitigation plans that involved drilling boreholes, constructing bulkheads, and backfilling the stopes with cemented paste tailings.
Studies and laboratory tests were done to assess the suitability of using the on-site mine tailings as a possible economic backfill feed material. Multiple paste mixes were developed for different applications: some for filling voids in bulk, some for filling remote barricades, and others for plugging leaks.
The team drilled investigative boreholes into openings as narrow as 2 metres wide and 140 metres deep. Using laser scanning, they were able to gather information about the inaccessible cavities and create 3D models and 2D plans in order to plot positions for delivering the backfill and building the containment barricades.

Backfilling in extreme cold
Backfilling began in October and ceased in mid-December 2014, with crews working in the extreme cold (temperatures ranged from -25 to -52 C). Producing paste backfill with an outdoor mobile system using highly variable frozen arsenic and silica laden tailings at extremely cold temperatures had never been done before. The mine’s utilities were limited, so the team adapted by using portable artificial lighting, by heating water and equipment, erecting tents for monitoring and testing, and building indoor tailing storage facilities.
With limited underground access and incomplete mine plans, the underground geometry was uncertain. The team had to adjust the paste recipes and delivery locations on the fly. This meant sequencing plans had to be developed for  multiple options and “if-then-else” scenarios. The hazards to underground workers posed by leaked paste also had to be constantly assessed.

Teamwork, Aboriginal training, taxpayer benefits
The technical team and contractors worked closely in a multi-disciplinary approach and counted on teamwork to overcome hurdles such as paste freezing in the pipeline in mid-pump stroke.
Golder committed to providing a monetary award for work done by Aboriginal people in an educational setting and to support local communities through Aboriginal training and apprenticeships.
Proving that local tailings material present at the site can be used to stabilize underground openings represented a large cost saving.  The project was delivered on time and on budget, and it helped reduce the $903 million liability that the overall Giant Mine Remediation project is estimated to be by the federal government.