“The engineers worked closely with individual First Nations in Saskatchewan and Manitoba to provide environmental site assessments and remediation plans for their reserves. We appreciated how this work was then integrated with individual frameworks for future land management. These policies included social and economic factors specific to First Nations.” – Jury 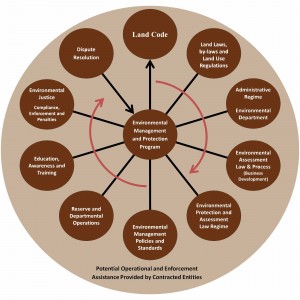 Several First Nations in Saskatchewan and Manitoba have joined the First Nation Land Management (FNLM) Regime. The program helps them to protect and manage their Reserve lands, and will enable them to develop those lands’ resources and their economies in a sustainable way. The program assists First Nations toward becoming self‑governing, vibrant, self-sustaining communities.
The process in itself is an innovation. The federal government and First Nations had a vision in the 1990s to pass management of Reserve land over to the First Nations. There was no process, model or similar projects to follow at the time. PINTER assisted in developing the process, which went through a number of changes along the way.
The FNLM Regime that was implemented has six components. It involves individual environmental site assessments (ESAs) of entire reserves, detailed environmental testing and environmental remediation. It also involves identifying issues, developing management plans and legislation, followed by implementation. The management planning stage involved developing unique, individualized legal and policy frameworks for each reserve’s future land and environmental management.

Muskoday, Whitecap Dakota & Opaskwayak Cree First Nations
PINTER has assisted with implementing the FNLM Regime at 12 First Nations, in Saskatchewan and Manitoba. Among them are Muskoday First Nation, Whitecap Dakota First Nation and Opaskwayak Cree Nation (OCN).
PINTER completed Phase 1 ESAs to identify potential impacts, Phase II assessments to confirm and delineate the suspected environmental impacts, and Phase III remediation of those impacts.
The consulting engineers also gathered information from the First Nations and helped them to plan and develop environmental management and protection programs. These programs arrange for the administration, education, monitoring, compliance and enforcement of each First Nation’s environmental regime. The programs ensure that development occurs in line with both the environmental concerns and traditional culture of each First Nation.
In 1999 PINTER was commissioned to carry out an environmental site assessment for the Muskoday Reserve. Muskoday continues to work with PINTER on implementing their environmental and legal framework to this day. The engineers went on to play a similar role for the Whitecap, which is currently actively engaged in developing their legal system. PINTER has also helped OCN develop their environmental and legal framework which they are planning to implement this year.

Challenges and complexities
The environmental problems that were encountered on the Reserve lands included everything from dump sites and salvage yards, to fuel storage tanks, agricultural chemicals, fence post treatment, copper wire burning sites, etc.
As the program changed from a prescriptive model to a First Nation directed model, the procedures and policies evolved as PINTER began to better understand First Nations expectations and as those expectations changed over time.
Working with multiple First Nations simultaneously, each with their own community and environmental issues, perspectives, priorities and political agendas was challenging.
The First Nation expectations also had to be balanced with the mandates of government agencies. PINTER had regular communications with First Nation clients, AANDC, community members, project stakeholders and legal counsel.
The First Nation Land Management Regime is the first of its kind. The environmental assessments and remediation of legacy sites provided context and examples to First Nation Band Councils of negative environmental impacts. The land management process increased their knowledge of proper environmental stewardship and practices.
The project combined the use of engineering principles with community involvement to enable positive changes on these First Nation Reserves. First Nations in Canada are poised to become a large demographic and economic force. Strong, independent and sustainable First Nation economies benefit them and also Canada as a whole.