André Rochette – a story of resourcefulness and optimism

André Rochette, president and CEO of Ecosystem, started a company in his parents’ basement in Quebec City 20 years ago. 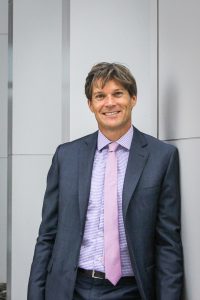 I think people wake up in the morning to do good. So given the right set-up, if you allow them to do better work, you don’t need to pressure them. It’s just human nature.”
André Rochette, P.Eng., is sitting in the Toronto office of his company Ecosystem. Outside the renovated 100-year old building the sun is shining down on the business crowd hurrying along King Street West.
Rochette is talking about how Ecosystem operates. The company specializes in “deep energy retrofits” for buildings, which result in “anywhere between 30% and 40% savings.” It also acts as a design-builder, assigning projects to teams who work as construction managers as well as designers. And it does “Integrated Energy Performance Contracting” whereby it guarantees the results of the energy retrofits to the building owners — sometimes for up to 20 years.
The 46-year old Rochette is tall and lean, with a wide smile and tousled hair. He speaks flawless English, tinged with a Quebec accent. He’s open and friendly, attentive without being intense. It’s easy to see him as an effective leader and co-partner in a company that started in his parents’ basement in the 1990s and has grown to have 150 employees. Ecosystem is based in Quebec City, but now has offices in Montreal, Toronto, Calgary, New York and Boston. In an era when engineering companies are becoming ever more gigantic and globalized, Ecosystem shows it is possible for start-up Canadian firms to flourish and march to their own drumbeat.

Venturing out
Worms, not HVAC systems, were on Rochette’s mind when he was first venturing out. He had studied chemical engineering at Laval University. “They were the years of [concern with ] acid rain, and I thought I would work with an industrial company on controlling emissions,” he says. He graduated in 1992, but: “Those who remember those years know that it was a pretty bad time for finding jobs, especially in engineering.”
Unbowed by not being able to find suitable work, he started to think about different possibilities. He had an idea to make residential recycling bins. He tested a model in his parents’ basement. One side was for glass and metal, while the other compartment was a composting section inhabited by red worms who were supposed to digest the waste. The trouble was his parents liked eating grapefruits, but the worms did not. “The stuff became too acidic, and the worms ran away — not very far, just a couple of feet over the dry concrete,” he laughs. “So that was my first idea, and it was going to be called “Ecosystem.”
The father of a friend set him on a different track. The friend had installed a $300 thermostat in his small industrial unit, and suggested that Rochette should sell the devices to the other units in the park. The thermostats were simple equipment to adjust a building’s heating temperature at night and on weekends. Rochette found himself in sales (“which had nothing to do with my chemical engineering background”) and embarked on his first real business. “I realized there was a market called energy efficiency.”
Then he met engineer Richard Tremblay, which led to another transformation. One of Rochette’s clients in the industrial park was expanding his premises and asked Rochette if he could help him out with drawings to get the building permit. Rochette didn’t have the expertise so in those pre-Google days he went to the Yellow Pages looking for a small consulting engineering company to help. “To me it looked like the companies with the big ads would be too expensive,” he says, “so I took the names that were printed as small as I could find.” He came across Beaudoin Tremblay. Richard Tremblay was the “mechanical guy.”
It was a fortuitous meeting, one that saw Tremblay and Rochette eventually become partners, along with a third person, Patrick Raby, who was a partner from 1993 to 2005 and is still with the company.
Rochette and Tremblay have complementary skills. “I’m very open by nature, so I like crazy ideas,” says Rochette. “So the day I met with Richard and he was coming up with all these innovative designs, I thought it was the greatest thing. Richard is very creative and he always had the solution that nobody had ever thought of. I liked the idea of having him take care of the technical side, and me taking care more of sales and management.”
“When Richard came on board is when we started to sell more integrated solutions; we started to do more deep retrofits,” continues Rochette. “The easy solution is to say, ‘O.K., we’ll stop the heating at night and we’ll change the lightbulbs to LEDs.’ But to reinvent and re-engineer the entire production and distribution of energy — that’s what we like to do. That’s where the innovation is and that’s where you can do what we call a deep retrofit to generate the 30 or 40 per cent savings.”

Holistic approach
Business was slow at first. Ecosystem operated from Rochette’s parents’ basement for a couple of years, and Rochette’s father, who had recently retired, looked after the accounts. Then in 1998, the Quebec government passed a regulation to allow design-build energy performance contracts to be used for its building retrofits. The process required a fully designed proposal that would be evaluated by its technical merit and “net present value.” Ecosystem already had some experience in doing these projects that guarantee energy savings to the owner over the long term, so it was good news for them. Two years later, when the price of gas “went through the roof,” says Rochette, the market for energy efficiency projects took off.
One of their most important projects was a wholesale reorganization of the cooling and heating systems for the Biodôme (“Space for Life”) in Montreal, which is a vast, indoor nature exhibition space enclosed in glass. Ecosystem applied its holistic approach and found radical ways of recycling energy between its different ecosystem areas.
The Biodôme was being heated and cooled from steam and chilled water supplied from the Olympic Stadium nearby. Ecosystem’s engineers took this further and incorporated heat exchanges within the building. For example, they took the heat energy being extracted from the Polar ecosystem, and use it to heat the Tropical Rainforest area.
“Then at some point my crazy partner goes on the subway. ‘André,’ he says, ‘you know that in the subway [tunnels] there is water leaking everywhere. There must be a lot of water in the ground. Why don’t we do a geothermal system?’”
“So we ended up with an open loop geothermal system. There is enough water in the underground lake — or river (nobody knows) — to heat the entire Biodôme throughout the winter.”
It sounds simple now, but it took an enormous effort and almost 10 years to see their ideas realized. Rochette and Tremblay phoned the manager of the Biodôme, Jean Bouvrette, “out of the blue,” and he was receptive.
At the time Ecosystem was still a small, struggling company without large resources. Still Bouvrette “kept talking to us,” says Rochette. “We probably had 50 meetings.”
What partly held things back was the fact that the city of Montreal did not have the legal and financial instruments to enter an energy performance contract at the time. Eventually the city sorted things out, held a competion, and Ecosystem won it against one of North America’s largest controls manufacturers. Ecosystem completed the project in 2010. It won the ASHRAE Technology Award in 2013, and the Association of Energy Engineers International Energy Project of the Year Award last year.

Not fat, but muscle
The company opened its Toronto office in 2000, initially to retrofit the CBC building. In the U.S. they opened up shop in New York in 2009, doing a retrofit of the Beth Israel Medical Centre. It was a $4 million project where they converted the heating system from steam to hot water, achieving 85% efficiency.
They’re currently helping the Calgary Board of Education (see p. 23), and recently completed a retrofit of the Montreal headquarters of CAE, a large global aviation and defence company.
Rochette is confident about their approach. “People sometimes tell me, ‘Well there must be a lot of fat in your model because you spend more money on design and you guarantee that you are never going to charge extras on a project.”
“But the reality is it’s not fat, it’s muscle. If you are going to come up with the most innovative solutions, you have to have your best people putting efforts in the design.”
He continues, “It’s not just design. Our people are construction managers. Every day they spend money on a project they have to make sure it will lead ultimately to results. They’re not there just to build what’s on the drawings, they’re there to build the best solutions and they adapt constantly. So we have to have a very agile model where you constantly revise things to make sure it’s the best solution for tomorrow.”
They assign each project to one of eight project managers who are then given autonomy over the work. Rochette’s confidence in them comes from respect for people’s individuality. “I tell our people you have to find out what your strengths are, and you have to find the job inside the company where you can make full use of your strengths. Then whatever weaknesses you have is not an issue.”
“Richard and I,” he continues, “we’re so different. Richard is this really crazy innovator. I’m more the manager and the sales guy. It’s the way I’ve structured the business. I realized that in life there’s a palette of colours and nobody has all the colours. So the people who are good with blue, let them do a lot of blue. And those who are good with red, let them do that. Some people are very, very worried about risk. Some love to take on more risk. Some are very creative. Some are very organized.”
And how does Rochette view the world? “I tend to wear rose-tinted glasses more than dark ones,” he replies with a smile.