Construction has started on new works to convey stormwater from the West Don Lands on Toronto's waterfront. The 32-hectare precinct , east of downtown will be the site for the athletes' village for the 2015 Pan Am Games. 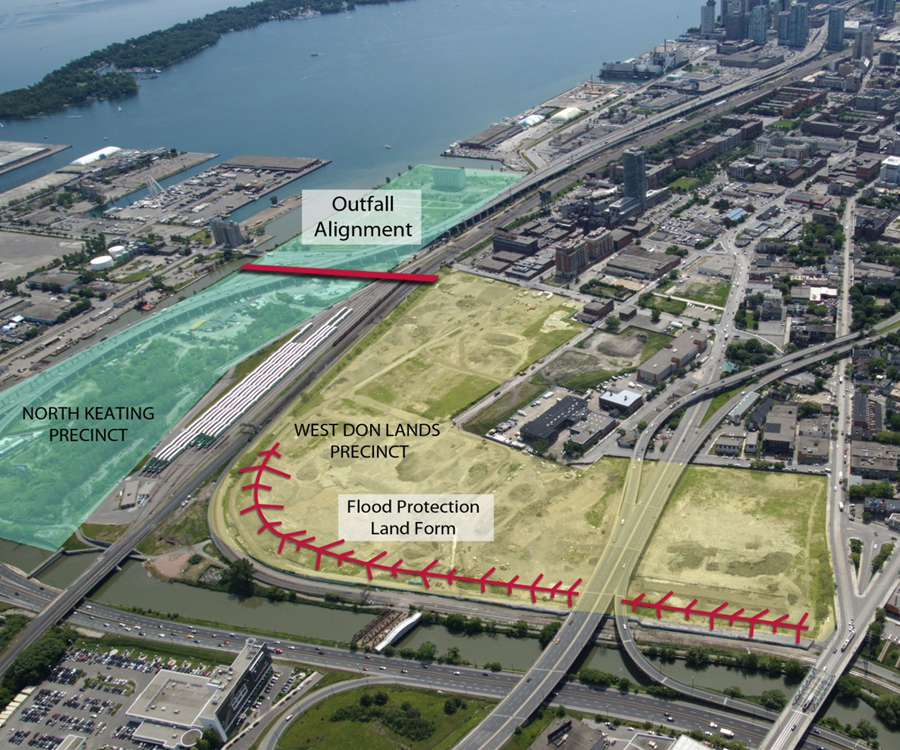 Construction has started on new works to convey stormwater from the West Don Lands on Toronto’s waterfront. The 32-hectare precinct , east of downtown will be the site for the athletes’ village for the 2015 Pan Am Games.

The West Don Lands is on reclaimed land near the mouth of the Don River, so in order for the land to be developed, massive earthworks have been built to protect it from flooding. The earth berms have blocked the stormwater drainage paths so the site had to be re-graded and a new outfall is being built into the Keating Channel.

R.V. Anderson Associates are the prime consultant on the stormwater conveyance and treatment project. It involves tunnelling deep in bedrock using a tunnel boring machine in order to construct a new storm sewer outfall pipe. The pipe has to pass below the busy commuter rail line along the lakeshore, the Gardiner Expressway, high voltage power lines, major gas lines and other infrastructure.

The stormwater will first go through an oil-grit separator and a treatment facility, which is located at the northeast corner of Lake Shore Boulevard and Cherry Street. Designed by R.V. Anderson Associates and gh3 Architects, the 300-m2 stormwater quality treatment facility is to be a landmark for the West Don Lands and recently won an award from Canadian Architect magazine.