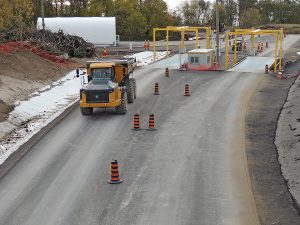 A milestone was reached on November 1 at one of Canada’s most notorious waste sites. The first truckloads started carrying low-level radioactive waste from the shoreline of Lake Ontario in Port Granby to an engineered above-ground storage facility. The waste was generated during the radium and uranium refining operations of Eldorado Nuclear, which operated between 1930 to 1988, first by private corporations and then as a Crown corporation.

The clean-up in Port Granby, part of the municipality of Clarington, is one of two former Eldorado waste sites in the region half way between Toronto and Kingston. The second site is at Port Hope, 15 kilometres further east, where a long-term storage facility is still under construction. Both sites are being remediated by the Port Hope Are Initiative (PHAI) office, led by Canadian Nuclear Laboratories on behalf of Atomic Energy of Canada.

In Port Granby the 450,000 cubic metres of waste is being carried about 700 metres north to a long-term storage facility. Designed by AECOM and built by AMEC-CB&I Joint Venture, the storage mound has a highly engineered base liner system. The waste is being carried in sealed trucks along specially constructed internal roads and an underpass under Lakeshore Road..

Craig Hebert, PHAI general manager, said on November 1: “Today we are witnessing history, as we begin the final chapter in addressing this long-standing environmental issue. All of the hard work that has gone into preparing for this complex undertaking has brought us to this point. After years of extensive planning, community consultation and working with government stakeholders to bring this important project to fruition, the cleanup has begun.”

The clean-up in Port Granby is scheduled to take place over three years, after which the mound’s cover system will be constructed, expected to be in 2021.

“Everyone involved with the Port Granby Project is proud of their work and excited to see the cleanup begin,” said Hebert. “Our strong team is committed to delivering this project with the safety of the public, workers and the environment as the PHAI’s top priority.”