Radioactive waste storage facility at Port Granby to be built

Natural Resources Canada awarded an $86.8-million contract last week in a major step forward in dealing with the low-level radioactive waste around Port Hope and Port Granby on the shores of Lake Ontario east of Toronto. The two sites, approximately 20 kilometres apart, are being collectively dealt with as the “Port Hope Area Initiative” and represent one of Canada’s largest environmental restoration projects.

A joint venture of AMEC Foster Wheeler with CB&I has been given the contract to construct the new Long-term Waste Management Facility at Port Granby, which is in the Municipality of Clarington. The work includes moving approximately 450,000 cubic metres of historic low-level radioactive waste and contaminated soils from an existing waste management facility on the shoreline of Lake Ontario to the new facility, which is located about a kilometre north.

The new storage facility is a multi-layered system with an engineered above-ground mound. Designed by AECOM, it has a cover approximately 2.75 metres thick, and will include a capillary drainage layer system and monitoring systems within and around the mound. A wastewater treatment plant has already been constructed to treat any leachate from the mound.

The historic waste in Port Hope and Port Granby were the result of radium and uranium processing over 50 years between 1933 and 1988 by the former Crown corporation Eldorado Nuclear Limited, and its private sector predecessors.

In January 2012, the Minister of Natural Resources announced a Government of Canada investment of $1.28 billion over 10 years for the implementation phase of the PHAI.

Erin O’Toole, Member of Parliament for Durham, said on July 30: “The awarding of this construction contract is a very positive move for the Municipality of Clarington. It brings with it new jobs and other economic benefits. It also is a crucial step toward environmental remediation of our beautiful landscape.”

For more details about the Port Granby project, click here. 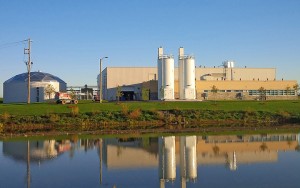