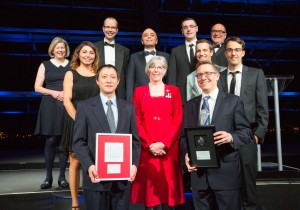 Held at the Vancouver Convention Centre West, the event theme was “Countdown to Excellence,” with guests “orbiting … into a moon-scape atmosphere, filled with intergalactic possibilities.”

The Honourable Judith Guichon was a special guest and presented the Lieutenant Governor’s Award for Engineering Excellence to Buckland & Taylor. The specialist bridge engineering firm is based in Vancouver but won the award 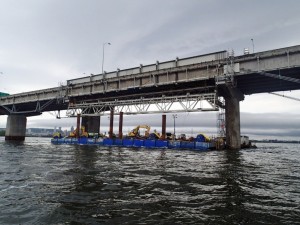 Work under way on the superbeam and modular truss installed in an emergency on Montreal’s Champlain Bridge. Buckland and Taylor were the design and construction engineers for the remediation. Photo courtesy: Buckland & Taylor.

for a project in Quebec — the design and construction engineering of the Champlain Bridge Superbeam and Modular Truss project in Montreal. The project dealt with an emergency situation that arose when a major flexural crack was discovered in one of the post-tensioned girders of the bridge. Within 48 hours the bridge was fixed by installing a stabilizing component – the Superbeam – until the winter weather subsided. A steel truss was later installed as a permanent solution.

Keith Sashaw, president and chief executive officer of ACEC-BC, noted: “Buckland & Taylor’s innovative approach, responsiveness and expertise played a critical role in the safe completion of such a large and complex project. Minimal impact was made to commuters and the flow of commercial goods on the bridge, despite the challenging winter working conditions.”

The Champlain bridge project also won an award of excellence, as did four other projects. These were:

“This year’s winners represent the best and brightest that our industry has to offer, and are a testament to the amazing work of B.C.’s consulting engineers that we have been showcasing on this stage for 26 years,” said Sashaw. 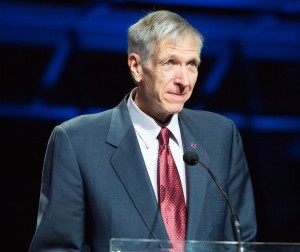 ACEC-BC also gives two awards to individuals. The Meritorious Achievement Award was given to John Collings, P.Eng. of Collings Johnston for significant lifetime contributions to engineering, the industry and the community. Collings has been a leader in the transportation industry and has served on advisory and technical committees of the Transportation Research Board, Vancouver Board of Trade, and ACEC-Canada.

The Young Professional Award, which recognizes an individual for achievements in the first 10 years of their career, went to Mark Byram, P.Eng. of Levelton Consultants. Mark has served as Chair of ACEC-BC’s Young Professionals’ Group and as an ex-officio member of the ACEC-BC Board of Directors. In 2013, he was sponsored by 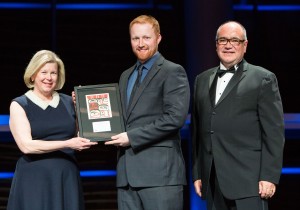 Mark Byram, P.Eng. (centre) of Levelton receiving the Young Professional Award at the ACEC-BC awards in Vancouver on April 10. Photo: ACEC-BC/Kim Stallknecht. At right is Keith Sashaw, president and CEO of ACEC-BC.

ACEC-BC to travel to Barcelona to attend the International Federation of Consulting Engineers (FIDIC) centenary conference.