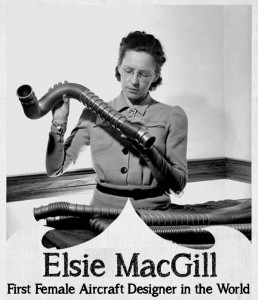 Engineers Canada is encouraging engineers to support its nomination of Elsie MacGill to be pictured on a new bank note to be issued in 2018.

The federal government is seeking nominations of important Canadian females for the honour until April 15, after which it will present a short list.

Minister of Finance Bill Morneau explained the reason for their search: “In our country’s nearly 150 year history, women, with the notable exception of the Queen, have largely been unrepresented on our bank notes. In 2018, we will bring real change to a new generation of women who will carry with them constant reminders that they are not only Canada’s future, but a celebrated part of our history.”

Nominees have to have been deceased for at least 25 years, cannot be a fictional character, and must be a Canadian by birth or naturalization.

Elsie MacGill, known as “Queen of the Hurricanes,” was chief aeronautical engineer at Canadian Car & Foundry during World War II. She was in charge of the Canadian production of the Hawker Hurricane fighter plane, which earned her the name “Queen of the Hurricanes.” She oversaw the CC&F operations in Thunder Bay (then Fort William) when the number of workers grew from 500 to 4,500 and they produced three planes a day. The single-seater plane won 60% of the air victories by the Royal Air Force during WWII.

She moved to Toronto in 1943 and ran an aeronautical consulting business. She also worked tirelessly to advance women’s rights and won many awards, including the Order of Canada in 1971. She won the Gold Medal from Professional Engineers Ontario in 1979 and was inducted into Canada’s Aviation Hall of Fame in the 1980s. She died in 1980 in Cambridge, Massachussetts.

To read about Engineers Canada’s nomination of MacGill, click here.

To nominate MacGill or another Canadian woman for the bank note, visit the Bank of Canada’s website, click here.