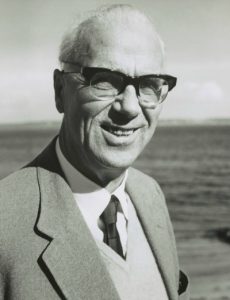 Engineers visiting London, U.K. this summer might be inspired by in an exhibition dedicated to Ove Arup.

“Engineering the World: Ove Arup and the Philosophy of Total Design” opens at the Victoria & Albert Museum on June 18.

It is the first major exhibition on Arup’s work and will show how he pioneered the idea of “Total Architecture” as a holistic, multi-disciplinary approach to design. Featuring over 100 years of engineering, the exhibition includes 150 previously unseen prototypes, models, and other materials. It will also tell the stories behind Arup’s buildings such as the Sydney Opera House, the Centre Pompidou in Paris and Highpoint 1 in London.

More recent work by the firm is also on display, including Crossrail, London’s newest Underground transit line, and green building innovations such as SoundLab and SolarLeaf, which is an experimental bio-reactive building facade system that uses microalgae to generate renewable energy.

Arup was born in Newcastle, England in 1895 to a Danish veterinary surgeon and a Norwegian mother. He went on to study engineering at the Technical University of Denmark, Copenhagen and was deeply influenced by the Modernist architect Le Corbusier and Walter Gropius, founder of the Bauhaus movement.  During World War II he helped design the Mulberry temporary harbours used during the D-Day Landings.

He founded a company of engineers and contractors with his cousin in 1938, but this was dissolved in 1946 when he and partners Ronald Jenkins, Geoffrey Wood and Andrew Young launched Arup and Partners as a firm of civil and structural engineering consultants. Today Arup is a large multi-national corporation doing work around the world.

When Ove Arup died in 1988 his ashes were scattered from Kingsgate Bridge, a structure he had helped design which sits near Durham Cathedral in northeast England.

To read more about Ove Arup in Wikipedia, click here.