Israel flush with water thanks to desalination 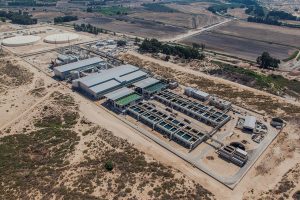 A recent article published in Scientific American describes how Israel has gone from suffering water shortages during its worst drought in 900 years, to having surpluses.

Rowan Jacobsen, author of the article, which originally appeared in Ensia, visited the new Sorek desalination plant, which is the largest reverse-osmosis plant in the world.

Located 10 miles south of Tel Aviv, the plant has a 625,000-m3 capacity,  enough water to supply 1.5 million people, and has a 100,000-m2 footprint. It draws water from the Mediterranean Sea, filters it through several feet of sand in reservoirs, and then through reverse osmosis turns it into something “cold, clear and miraculous.”

Sorek is just one of several desalination plants that Israel has been building to stave off the impacts of disastrously dry conditions in the Middle East. In 2008 the main source of freshwater, the Sea of Galilee, had dropped to within inches of the point where it would suffer irreversible salt infiltration.

The dire situation prompted the country to embark on a building program, and now desalination plants supply 55 per cent of Israel’s domestic water needs.

Sorek has 50,000 membranes, with water pushed through pores a hundredth of the diameter of a human hair. The article says that the desalination process is not so much an “energy hog” as it used to be. Sorek produces 1,000 litres of drinking water for 58 cents U.S.

Another problem with desalination ­– biofouling – has been solved by using porous lava stone to filter the seawater and stop organisms accumulating at the membranes.

Edo Bar-Zeev, a Zuckerberg Institute researcher who is interviewed for the article, says he is hoping that their water technology will help to build bridges to other countries in the Middle East. He is planning a Water Knows No Boundaries conference in 2018 that he hopes will bring together people from Egypt, turkey, Jordan, Israel, The West Bank and Gaza.

Meanwhile Israel and Jordan are already in a joint venture to build a large desalination plant on the Red Sea and to share the water among them and the Palestinians. “By 2020, these old foes will be drinking from the same tap,” says the article.

Jacobsen’s article originally appeared in Ensia and was published with permission by Scientific American on July 19.  Click here.

To find out more about the IDE Technologies’ Sorek plant, click here.