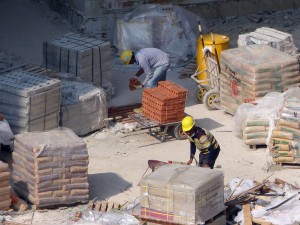 “Lean construction” was on the agenda at The Buildings Show/Construct Canada conference and trade show held in Toronto last week.
James Johnston, P.Eng. gave a presentation on Thursday, December 3 about the “Lean” approach, which aims at streamlining the multiple processes involved in building projects.
Johnston is an industrial engineer based in Winnipeg who previously applied “lean” principles in the manufacturing sector and has since moved into the construction field. He’s a trainer with the Associated General Contractors of America, a member of the Lean Construction Institute, and is now involved in developing the Lean Construction Institute-Canada, which was established this year.
What is the Lean approach all about? Johnston first explained the origins of the movement. He said it began in Japan after an executive from Toyoto visited the leading automakers in North America just after World War II. He saw acres of built cars sitting waiting for buyers, and warehouses of inventory waiting to be installed, and decided to do things differently. Now Toyota is the leading automaker “on the planet,” said Johnston.
Lean production is based on four principles, explained Johnston: “value, profitability, efficiency and continuously improving.”
But while manufacturing and other industries have doubled their productivity per man hour of labour over the last 50 years, the construction industry’s productivity has declined. In construction, waste and lack of productivity is “strikingly high,” said Johnston.
Of course, the seminar’s attendees came up with plenty of reasons why the construction process does not lend itself to the kind efficiencies that are possible with the relatively standardized processes of manufacturing. For example, there’s the separation between the client and the contractor; the weather; the fact that the labour can’t be automated and the site is a mobile operation, moving from stage to stage. Also, trends in recent years have fought against speed and efficiency. It was pointed out that buildings have become a lot more complicated with more tradespeople involved, and there has is more focus on health and safety (which can slow things down).
Johnston had a list of areas where the construction industry is under-performing: the regularity of defects and need for work to be redone; overproduction; labour time spent waiting and under-used talent; extra inventory; extra motion; extra processing.
Overproduction, for example, is endemic, said Johnston. The industry is full of the idea that if you are going to need work done eventually, it’s wise to “get it done now.” So concrete forms are built before they’re needed, but then the design changes. Products and materials are brought on site early so that they’re on hand, but then they “walk,” or they’re hidden under snow and are ordered twice.
Extra “motion” is a problem, he said, with workers walking unnecessary distances, as demonstrated by an electrical contractor that put pedometers on its workers. And a big issue is having workers waiting around and skilled people being used for unskilled labour work.
For solutions Johnston included fully integrated project delivery. With “IPD” there’s a sharing of the risk and reward, and the architect and engineer are motivated to “get it right in the first place.”
He also advocated the “Last Planner System” which involves making a series of commitments and making sure those commitments are upheld. Working from the master schedule to the daily schedule, you “pull work through” the schedule, rather than pushing it forward.
He recommends breaking up projects into six-week bites of time. The weekly work plan must be specific and detailed, and at the end of the week you must measure whether you achieved your commitments. If not, define why not. “We’ve spent decades normalizing failure,” he said, saying that a study showed that most traditional construction projects only stick to their schedule 50-65% of the time.
Asked how lean principles apply on the design team side, to architects’ and engineers’ work, he advocated concentrating on removing the “non-value added” work. And he advised the owner and designers being involved with the contractor as soon as possible to ensure constructability of the design.
You can apply lean principles in any project, Johnston said, but it requires a “long term shift in the way we think of our industry.”
The Lean Construction Institute’s website is here.