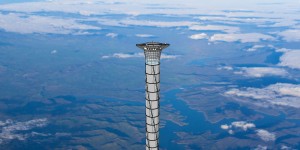 A Canadian space and defence company has been given a U.S. patent for a space elevator that would rise 20 kilometres, or 12 miles, above earth.

Thoth Technology of Toronto has designed the freestanding tower, which would be pneumatically pressurized. From the deck “space planes” could launch and refuel, or the tower’s deck could be used for generating wind energy, communications and tourism.

A space elevator can save more than 30% of the fuel that a conventional rocket would use to launch out of earth’s gravity.
Dr. Brendan Quine, an associate professor in space engineering and planetary physics at the Lassonde School of Engineering at York University, is chief technology officer of Thoth and the inventor. He says: “Astronauts would ascend to 20 kilometres by electrical elevator. From the top of the tower, space planes will launch in a single stage to orbit, returning to the top of the tower for refueling and reflight.”
Thoth president and chief executive officer Caroline Roberts says the space tower, coupled with self-landing rocket technologies being developed by others, will herald a new era of space transportation.

The idea of space elevators is growing in appeal. An international conference to be held August 21-23 at the Museum of Flight in Seattle. The ISEC 2015 Space Elevator Conference is expecting “an international audience of scientists, engineers, educators, entrepreneurs, enthusiasts, and students in discussions of Space Elevator Development including: climber design, materials research, technology, business and operations, public outreach, and legal issues.”

The ISEC conference site explains: “Space elevators are a new way to access space less expensively than possible with chemical rocket technology. The technology offers solutions to many of the problems facing the world today, including the need for clean, renewable energy. A space elevator uses a carbon nanotube ribbon that stretches from the surface of the earth to a counterweight in space. Climbers ascend the ribbon lifting cargo and passengers to earth orbits and launching spacecraft to distant planets.”

For information on the ISEC 2015 Space Elevator Conference, click here.