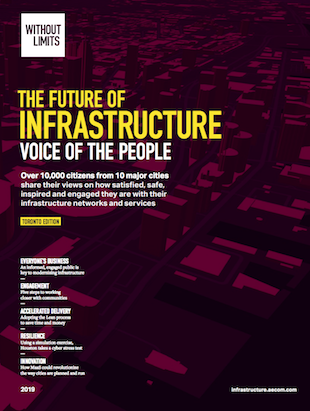 Among 10 major cities surveyed around the world, residents of Toronto express the lowest overall satisfaction in their city’s infrastructure, and for people in the Greater Toronto Area the upgrading of public transportation is their top priority for future improvements followed by improving environmental sustainability and upgrading utilities—this is all according to a new global report released by AECOM.

Entitled, The Future of Infrastructure: Voice of the People, an interactive online site provides briefs and statistics to read, and the full report can be downloaded by filling out a brief form.

“Residents of cities around the world want greater say in infrastructure planning, and they are growing impatient with delays in the delivery of modern infrastructure systems that can improve mobility, connectivity and quality of life,’’ says AECOM Chairman and CEO Michael S. Burke in a company release. “Their views should be a call to action for wider government engagement, and new public and private partnerships that can advance ideas, funding and advocacy, and speed the projects that lead to growth and urban well-being.”

Five insights from this year’s report: 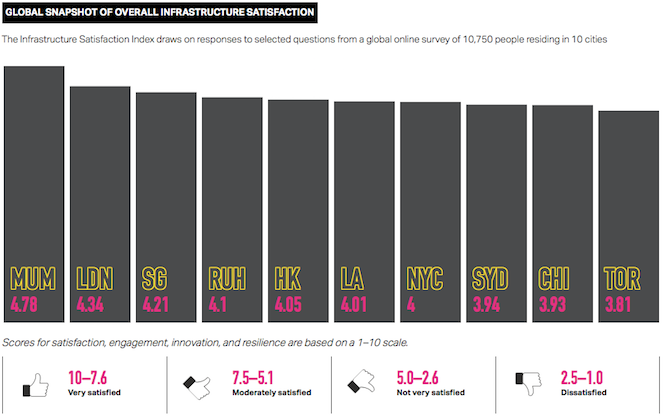 The report also outlines ways that infrastructure stakeholders can ensure greater engagement to secure and maintain citizens’ support during projects, and following completion.

It also provides guidance for aspiring smart cities about the benefit of exchanging data and ideas with companies, application developers and other innovators, as well as an opportunity to obtain citizens’ personal data if city authorities can ensure them it’s being handled securely and contributing to specific improvements.

The report also confirms that sustainability continues to be important to residents, and with high public interest, green initiatives can boost engagement. While long-term planning is not going away, planners who adopt an agile approach can test, design and scale projects at pace — and engage more deeply with citizens.

The report was produced by AECOM in collaboration with research firm Longitude. It was compiled in two ways: through a telephone survey of more than 10,000 people across 10 major global cities including Hong Kong (1031 respondents), Mumbai (1088), Singapore (1109), Sydney (1096), London (1118), Riyadh (980), Chicago (1014), Los Angeles (1121), New York (1128), and Toronto (1065). And secondly, the firm conducted qualitative interviews with a range of senior figures in the global civil infrastructure industry where AECOM was identified as the research sponsor.