World first: 3-D printing a two-storey house in one piece 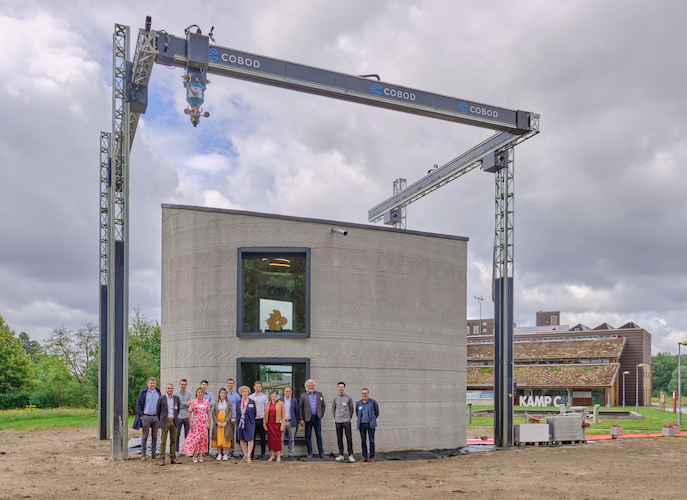 Kamp C, a centre for construction sustainability and innovation in Westerlo, Belgium, has produced on its premises what it says is the world’s first house to be 3-D printed in one piece.

The 90-m2 model dwelling was created using a modular Construction of Buildings on Demand (COBOD) 3-D printer, the largest of its kind in Europe. The 8-m tall, two-storey house is the average size of a terraced house in the municipality (which is in the province of Antwerp and the region of Flanders).

“What makes this house unique is we printed it with a fixed 3-D concrete printer,” explains Emiel Ascione, project manager. “Other 3-D printed houses around the world only have one floor and, in many cases, their components were printed in a factory and then assembled on-site. We printed the entire building envelope in one piece on-site.”

The house was built as part of the European ‘co-creation 3-D printing with companies’ (C3PO) project, with financing from the European Regional Development Fund (ERDF), in the hope of raising interest within the construction industry about the use of 3-D concrete printing techniques.

“Several possibilities, including the printing of provisional housing and even complete apartments, are already being implemented, but this technology is still very novel in Flanders,” says Kathleen Helsen, president of Kamp C and provincial deputy for housing. “That is why we created this unique location on our site, where construction companies can experiment, together with research and education institutions.”

The printed house’s material provides compressive strength that is reportedly three times sturdier than a house constructed conventionally with quick-build bricks, so the amount of wire-mesh reinforcement is minimal and formwork is redundant. Researchers will check whether this solidity is retained over time.

“We also eliminated cold thermal bridges altogether,” says Ascione. “We developed a low-energy house with all the modern conveniences, including floor and ceiling heating, solar panels and a heat pump. We will also be adding a green roof.”

It took three weeks to print the house, which will be open to visitors by appointment starting in September. In the future, Kamp C predicts, an entire house could be printed in less than two days.