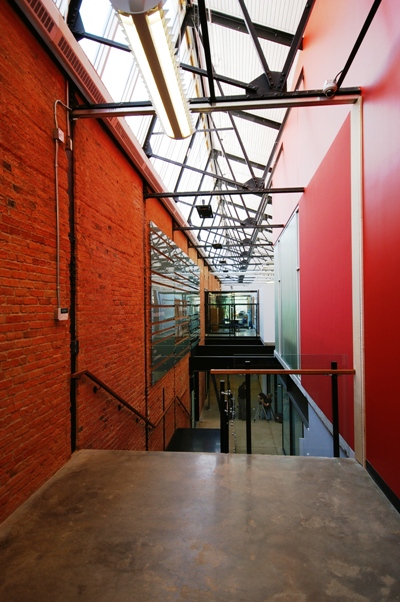 The Canadian Institute of Steel Construction (CISC) announced its annual awards on June 14, naming six projects from a total of 100 entries.
The structural engineers on the projects are named as part of the entire winning team.
In the architectural category the award of excellence went to the Cammilla & Peter Dalglish Atrium, Royal Botanical Gardens, Burlington, Ontario. The structural engineer is Halcrow Yolles, and the architect is Diamond + Schmitt.
The glass enclosed building has long steel spans that visually recalls a greenhouse.
An award of merit in the architectural category went to the Water Centre in Calgary. Read Jones Christoffersen was the structural engineer and Sturgess /Manasc Isaac were the architects. The building has about 700,000 kg. of reinforcing steel, most notably with a five-storey curved envelope that arches over the building “like a giant cresting wave.”
In the engineering category the award of excellence went to the well-known Richmond Speed Skating Oval in Richmond, B.C. Fast + Epp are the structural engineers of the roof, and Cannon Design is the architect.
The arches for the Olympic Oval are the longest spanning hybrid steel-wood arches in the world. Spanning 100 m, the arches are strengthened by a 10mm thick steel blade on the bottom edge, with W150 steel beams and 25mm thick steel plates strengthening the top.
An award of merit in the engineering category went to the Art Gallery of Ontario transformation in Toronto. Halcrow Yolles was the structural engineer and the architect is Gehry International. The project added 97,000 sq. ft. to a 100-year-old building (see CCE December 2009).
In the sustainability category, Triffo Hall at the University of Alberta won the award of excellence. Read Jones Christoffersen was the structural engineer and Johns Group2 was the architect on this LEED-platinum rated building. The building dates from 1915 and was restored back to its original design by removing ceiling systems and exposing the steel trusses that support the roof and clerestory.
An award of merit in the sustainability category went to Legendre Garage and Body Shop, Montreal. Pasquin St-Jean & Associes were the structural engineers and Provencher Roy was the architect.
The awards were handed out at Kananaskis, Alberta at the CISC’s 80th annual general meeting.
“The Canadian Institute of Steel Construction advances steel design and safety, as well as the efficient, economical and sustainable use of structural steel, particularly where steel is integrated with other building materials such as wood, glass and concrete.” said Rob Third, Chair of CISC’s National Awards Committee.
To see a full list of the winning teams and more details, click here.
http://www.cisc.ca/news/2010/6/nationalawards/