A sculpted 58-storey "L Tower" is being added above the Sony Centre for Performing Arts in the heart of downto... 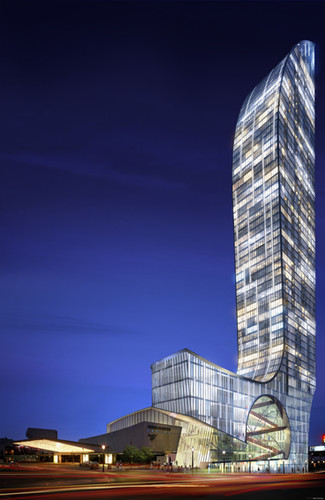 A sculpted 58-storey “L Tower” is being added above the Sony Centre for Performing Arts in the heart of downtown Toronto on the southeast corner of Yonge and Front Streets near the St. Lawrence Market. Ground was broken on the $270-million project in late October.

For decades known as the O’Keefe Centre, the 50-year old modernist building was the former home of the National Ballet of Canada. It later became the Hummingbird Centre, then the Sony Centre.

Famed New York architect Daniel Libeskind has designed the L Tower, which is named after him and the shape of the building. (Libeskind is also the architect of the extraordinary Crystal addition to the Royal Ontario Museum building uptown.)

Partly because the modernist building is designated as architecturally significant, the renovation project has taken years to get off the ground, involving 27 public meetings and requiring complex financing between the city and developers Castlepoint, Fernbrook and Cityzen.