M3 will be 81 stories, making it the tallest tower in Mississauga and one of the tallest buildings in the Greater Toronto Area. 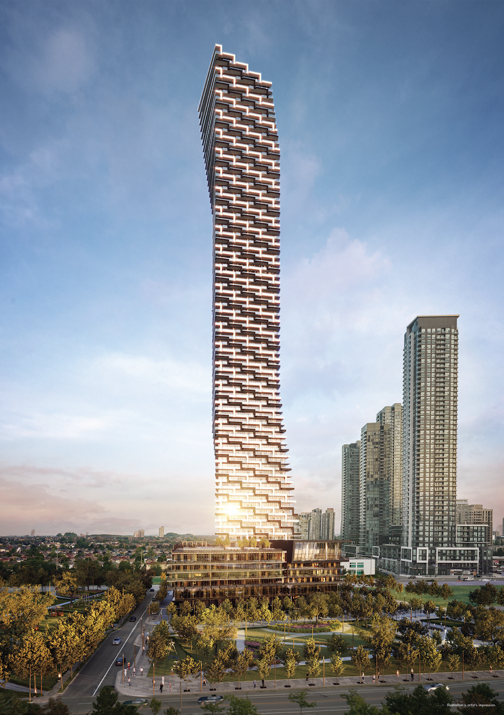 Following the successes of first two towers of the M City development, M1 and M2, the M City team has unveiled plans for a third tower along the western edge of Mississauga’s downtown. Designed by IBI Group, M3 will be 81 stories, making it the tallest tower in Mississauga and one of the tallest buildings in the Greater Toronto Area.

M3’s unveiling comes a few months after construction began on the more than 1,570 units that comprise M City’s first two phases. The 8-tower, 15-acre, 4.3 million sq. ft. master-planned community was designed by urban designers Cooper Robertson of New York, to reflect the city’s own vision for a new downtown, and introduces two acres of public parkland onto the site.

M3’s slender design features a subtle twist at the lower and upper parts of the tower and a sloped crown at the top. “M3 preserves the spirit of movement and twists that made the M City 1 and 2 buildings so striking. It was important for our design to embody this artful dynamism that has become so representative of Mississauga, but with a subtle, refined application,” said lead architect Mansoor Kazerouni, Global Director of Buildings at IBI Group, in a media release.

The tower’s verticality is enhanced by a dynamic façade defined by saw tooth balconies that create a black and white diagonal pattern up the building, providing scale, texture and materiality. “The tower form is crowned by a sloped and stepped top that complements the diagonal balcony pattern and creates incredible terrace units, giving residents an opportunity to experience the city like never before,” added Kazerouni.