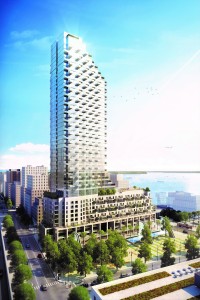 The architect known for the radical design of the Habitat 67 residential complex in Montreal is designing a tower on Toronto’s east waterfront.

Moshe Safdie was in Toronto on April 21 for the groundbreaking of the Great Gulf Monde Condominiums, the first tower on the East Bayfront Precinct which is under development. It is Safdie’s first residential project in Canada since he designed his famous complex for Expo ’67, the World’s Fair held in Montreal.

The new tower bears a slight resemblance to Habitat 67, in that it has deep balconies, some stepped back from each other, and wiith space for greenery. In his speech at the groundbreaking Safdie said the building would be a “garden in the sky.”

Habitat 67, which was originally Safdie’s student thesis idea, gained worldwide acclaim when it was built. It was constructed of identical pre-fabricated concrete boxes that were combined and stacked in different configurations to make apartments. Located near the St. Lawrence River, the complex rises to 12 storeys and has over 150 apartments, but was originally intended to be much larger in scale. Every unit has a large terrace ranging up to 1,000 square feet. The intention is to provide people with the benefits of fresh air and gardens while living in urban-type density.

The architectural renderings for the new Toronto tower show a much more conventional project, with units in a single tower rising from a large podium.

In Singapore, meanwhile, Safdie has designed a residential complex nearing completion that has closer affinities to the 1967 project. This “Sky Habitat” has two 38-storey towers which are staggered at a sharp enough angle to provide sunlit terraces, while three bridges connecting the towers at the upper level encourage social integration between the condo-dwellers. The upper bridge has a pool with views of the city.

To read in designboom about the Sky Habitat project in Singapore, click here.