The 2011 Canadian Consulting Engineering Awards were presented last night at a gala dinner at the Ottawa Convention Centre in the nation's capital. 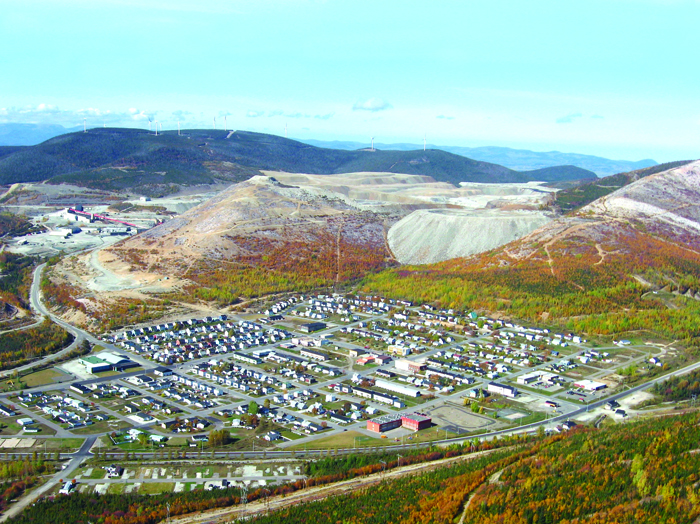 Town of Murdochville with the Gaspe Mine in the background.

The 2011 Canadian Consulting Engineering Awards were presented last night at a gala dinner at the Ottawa Convention Centre in the nation’s capital.

“Technical excellence and visual beauty” were the words used by the jury chair, Professor Carolyn Hansson, to describe all the entries.”

Held annually for 43 years, the awards are Canada’s highest mark of recognition for projects by Canadian consulting engineering firms.

The top technical awards went to the project “Rehabilitation of the Gaspé Mines” by GENIVAR for Xstrata Copper Canada. The jury was unanimously impressed by this huge project to decommission a copper smelter and mine in Quebec. With an investment of $116 million and four years of site work, the Gaspé Mines Rehabilitation project is the first smelter decommissioning project and the largest mining and metallurgical site closure in Canada. Despite 50 years of operation and the site’s heavy industrialization, this project is an eloquent example of responsible rehabilitation where economic, regulatory, environmental, public health and social issues were all taken into careful consideration.

The work involved demolishing the dust-filled mining buildings, decommissioning the mine tailings, and removing polluted soil in the nearby community of Murdochville. The jury felt that project should set a benchmark for future mine decommissioning projects.

The environmental “Tree for Life” award was given to the Kitchener, Ontario headquarters of Enermodal Engineering, a member of the MMM Group. Named “A Grander View,” the building was constructed as a showpiece for the company’s capability as a leading “green building” consulting firm.

Recipients of the Awards of Excellence are:

– The Queen Elizabeth Theatre Acoustical Renovations in Vancouver, by Aercoustics Engineering. The jury admired this project for its high degree of complexity, involving insulating the ventilation noise, and balancing the music loudness, reverberation, spaciousness and warmth — all in time to have the theatre ready for the 2010 Olympics.

– Poirier Sport and Leisure Complex, Coquitlam, B.C., by AME Group and IMEC Mechanical. The need to reduce energy expenditures of this large facility with year-round ice and curling rinks was solved by an impressive new heat exchange technology developed by IMEC and shared with the new Aquatic Centre and an adjacent library.

– St. Joseph Seminary, Edmonton, by DIALOG. This is a beautiful building incorporating modern architecture with traditional details. The jury was particularly pleased by the very detailed construction and the final, elegant appearance of the white concrete interior.

– Trafalgar Street Elevated Roundabout, London, Ontario, by Delcan. This project was selected on the basis of its complexity and benefits to the public in increased safety, reduction in traffic delays and improved rail efficiency.

– Dufferin Street Underpass, Toronto, by Delcan. The underpass was designed to eliminate a three-block diversion of road traffic around a multi-track rail corridor. Again, the judges recognized the complexity of the project and the resulting reduction in travel times and greenhouse gas emissions.

– Coast Meridian Overpass Design-Build Project, Port Coquitlam, B.C., by SNC-Lavalin Constructors (Pacific). The overpass is a 580-m cable-stayed bridge constructed by an ingenious push-launch system over an operating highway and rail yard, joining two sides of the city. The award was based on the social impact and technical complexity of the construction.

– Petite-Nation River Bridge, Lochabar, Quebec, by CIMA+. The judges selected this “life-line” design aimed at ensuring the safety of users and allowing the road to remain accessible during an earthquake. We appreciated the additional complexity that was necessitated by the terrain requiring the 425-m span to be constructed 35 metres above the river with piers of different height, wall thickness and ground anchoring systems, to ensure uniform rigidity of the structure.

This project was selected the award because of use of new membrane bioreactor technology which allowed the existing wastewater treatment plant, which had inadequate capacity for current and future needs, to be upgraded and extended within the same limited site.

– Chateh Water Treatment Plant, Alberta, by ISL Engineering and Land Services. The judging panel was impressed with this plant designed and constructed to treat some of the worst source water in Canada in an isolated community in Northern Alberta, being cognizant of the need to transport chemicals from far away, of the operational difficulties and of the overall life-cycle costs.

– GO Transit Rail Infrastructure Improvement Program, Greater Toronto and Hamilton, Ontario, by AGM Program Managers (Hatch Mott MacDonald, IBI Group, MMM Group). This was probably the most complex of the projects the jurors saw. The project aimed at a significant increase in the extent, capacity, safety and security of the GO system in the most highly congested region of the country.

The judging panel this year consisted of 12 distinguished engineers from academia, government and industry.  The jury chair was Professor Carolyn Hansson, P.Eng. a Professor in both the Mechanical and Mechatronics Engineering and the Civil and Environmental Engineering Departments at the University of Waterloo.

To see detailed descriptions and photographs of the winning projects, as well as a full list of the jurors, see the October-November issue of Canadian Consulting Engineer. To view, click here.

Canadian Consulting Engineer is a bi-monthly magazine for engineers in private practice. It is a division of BIG Magazines LP of Toronto.