Entuitive, Grimshaw and SBP are leading the design and engineering team. 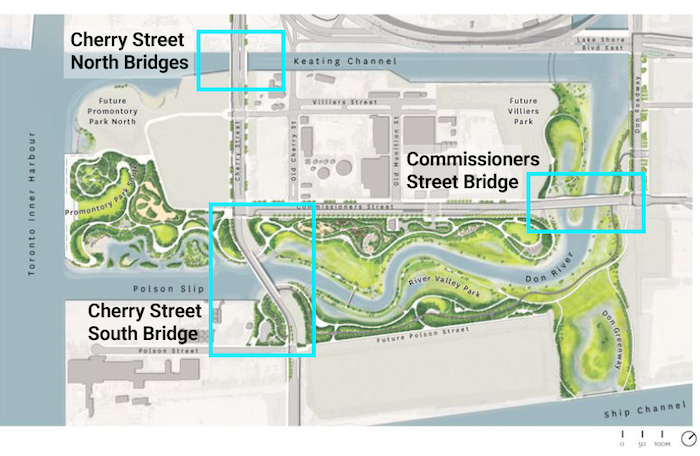 Villiers Island will be accessible via three north-south bridges along Cherry Street, including two crossing the Keating Channel (one dedicated for streetcars and another for pedestrians, cyclists and cars) and one further south over the extended Don River and, finally, an east-west bridge along Commissioners Street crossing the river.

The engineering team, led by Entuitive, Grimshaw and Schlaich Bergermann Partner (SBP), has focused on sleek and open designs for visibility’s sake, while avoiding the need for lighting in the hope of protecting wildlife. They have worked closely with road designers WSP and DTAH and landscape architects at Michael Van Valkenburgh Associates (MVVA).

To fabricate the bridges, shipbuilders at Central Industry Group (CIG) in the Netherlands are bending steel to create the shells. Next, Cherubini Metal Works is assembling and welding the bridges in Dartmouth, N.S., before shipping them by barge along the St. Lawrence Seaway to Toronto; the first will be the transit bridge, to be shipped in one piece and placed over the channel by crane.

The bridges are being fabricated in Dartmouth, N.S. Photo courtesy Cherubini Metal Works.