Since 1904, the structures that comprise the Western Headworks on the Bow River near Inglewood in Calgary have been diverting water into a canal that provides irrigation to the semi-arid region east of the city. 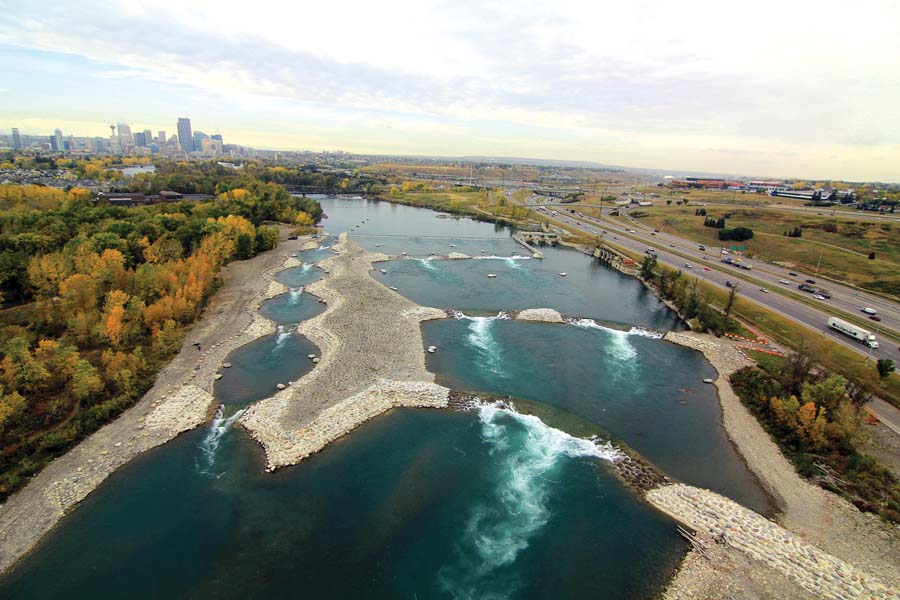 Aerial View of the work under construction in the Bow River, in a section known as the Harvie Passage.

Since 1904, the structures that comprise the Western Headworks on the Bow River near Inglewood in Calgary have been diverting water into a canal that provides irrigation to the semi-arid region east of the city.

The weir, however, was obstructing fish passage, and was very dangerous — so dangerous in fact that it was called the “Drowning Machine” even on posted signs.

To help reduce the dangers and make the weir passable for kayaks and other non-motorized boats, Parks Foundation Calgary decided to redevelop the structures. Golder Associates and Northwest Hydraulic Consultants did a preliminary design, then in 2006, Klohn Crippen Berger in association with Northwest Hydraulics Consultants and Recreation Engineering and Planning were retained by Alberta Transportation and Alberta Environment and Water (which owns and operates the headworks) to do the final design, contract administration and commissioning.

The area has since been renamed the Harvie Passage, honouring the contributions of a local family.

The new construction had to maintain the Western Headwork’s primary function of diverting water from the Bow River. Also it could not result in increased river levels upstream during a 1:100 year flood event. Another requirement was to facilitate the passage of fish. Even though a fish ladder had been incorporated in the weir when it was rebuilt in 1975, fish were not passing through.

Aesthetics were also important: the new structures had to be in keeping with the natural beauty of the Bow River.

Creating a pool and riffle

The redevelopment could adapt the weir but not remove it. One big change done was to construct hydraulic “drop structures” consisting of large boulders just downstream that change the hydraulics over the weir from circulating to linear. The structures create a series of pools and “riffles” (rapids) that act as whitewater play areas for experienced kayakers and rafters.

The island and drop structures have a low profile in the river and are designed to be overtopped by a greater than 1:2 year flood. This design ensures that the weir modifications don’t increase flood levels upstream in downtown Calgary.

In other changes, a 4-metre long cast-in-place concrete section with a vertical drop was added along the downstream side of the weir to reduce the significantly submerged roller or circulating hydraulic. As well, portions of the existing weir were removed at four locations to create notches or entranceways into the low water and high water passages.

In preparing the design a comprehensive physical model of the entire project was constructed at a 1:50 scale at Northwest Hydraulic’s laboratory in Edmonton. The model reproduced an 850-m reach of the river and was used to validate and compare pre-project and post-project conditions varying from a low flow of 44 m3/s up to the 1:100 year flood discharge of 2,750 m3/s. Flume models provided a more detailed indication of the hydraulic performance of the drop structures.

The drop structures are in a turbulent hydraulic environment and are subjected to varying differential heads, ice action, and frequent freeze-thaw and wet-dry cycles. Consequently, the boulder size was critical. Boulders with an equivalent spherical diameter of 1 m (1.4 tonnes) to 1.8 m (8 tonnes) were used.

Natural materials such as boulders, cobbles, and gravels were used whenever practical. Conventional hydraulic structure designs with the desired design life of over 50 years would typically consist of man-made materials of reinforced concrete, structural steel and steel sheet piles.

Construction started in the summer of 2008 for $16.6 million and was completed in 2011. The project had to be carefully sequenced and involved isolating the different components from the river using cofferdams.