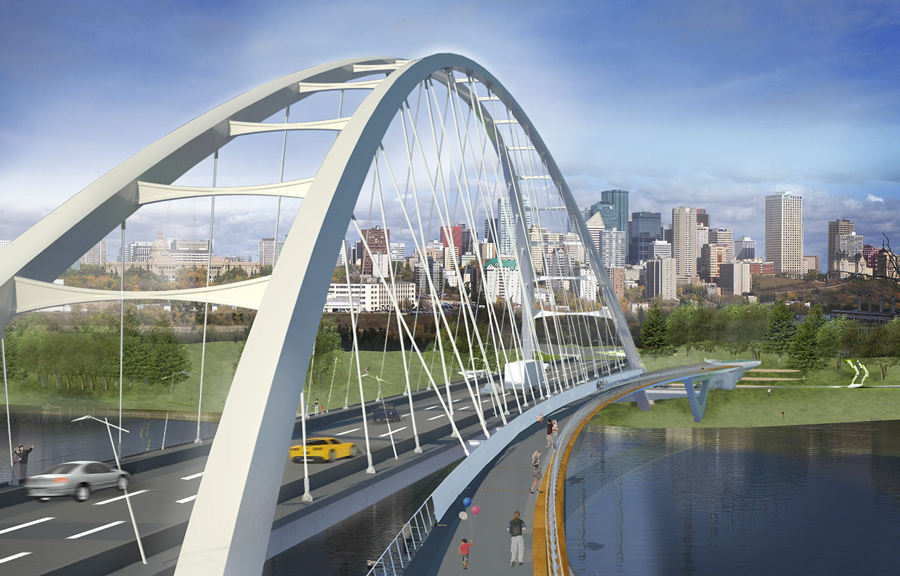 The Walterdale Bridge that was built in 1913 to link Edmonton’s downtown across the North Saskatchewan River to the southside community of Strathcona, is being retired. Some 33,000 vehicles rumble across the bridge daily, but it is being replaced by a new one under construction and slated for 2015 completion.

The new thrust-arch bridge has a 230-metre long deck and a single span. It is located several metres east of the existing bridge, crossing the river at an angle so that it will align with 105 Street to the north.

DIALOG has been involved in the project since 2011. Associate Kris Lima, P.Eng., was deputy project manager of the design team and is now serving as the owner’s representative as construction manager.

The North Saskatchewan River Valley provides valuable green space in the city, so Lima notes it was important that the new bridge should not become “overly intrusive.” Furthermore, the designers didn’t want the structure to shift too much attention from the nearby High Level Bridge, a century-old landmark that dates from a year before the old Walterdale.

The thrust-arch design of the new bridge eliminates the need for in-stream piers and facilitates ice movement on the river. The diameters of the arch ribs taper from about 2.5 metres at the base to about 1.4 metres at the top of the arch, which extends 43 metres above the bridge deck and 55 metres above normal river levels. The two arches incline toward each other at about 14 degrees off the vertical, adding to the structure’s aesthetics.

Less apparent to casual observers will be the stationing of massive 400-cu.m concrete thrust blocks 15 metres below-grade in the underlying shale and limestone bedrock. With glacial till and clay so prevalent in the Edmonton area, engineers have tended to resort to deep pile foundations, so using thrust blocks amounts to a new departure for an Edmonton bridge.

The old bridge is scheduled for demolition in 2016.

The foreign-trained “engineer working as a taxi driver” syndrome may become a thing of the past in Ontario if the Ontario Human Rights Commission has its way.

The commission issued a new “Policy on removing the ‘Canadian experience’ barrier” on July 15. That policy deems it discriminatory for anyone to apply a strict requirement for “Canadian experience” when hiring an employee.

Currently Professional Engineers Ontario requires that for someone to qualify for an engineering licence, they must have four years of experience, one of which must be obtained in Canada.

In announcing the OHRC’s new policy, which was written in partnership with KPMG, Chief Commissioner Barbara Hall said: “Ontario attracts highly-skilled immigrants from all over the world, but if they have to meet a requirement for Canadian experience, they are in a very difficult position — they can’t get a job without Canadian experience and they can’t get experience without a job. In most cases, that is discrimination under Ontario’s Human Rights code.”

On June 26 the city of Hamilton celebrated the completion of an $80-million program to improve the quality of storm and wastewater released into the city’s harbour. Known for decades as “steel town,” Hamilton has a population of 520,000 and sits west of Toronto on Lake Ontario.

The program consisted of a $57-million new combined sewer overflow system that feeds into the city’s Woodward Avenue Wastewater Treatment Plant. Upstream, upgrades were made at four sites and ranged from installing new monitoring equipment, to adding an underground gate. The Woodward plant itself was upgraded with a primary clarifier and sedimentation process. AECOM were consulting engineers for the treatment plant upgrade and Stantec were engineers for the collection system upgrades.

Another $2.4 million component saw the addition of a de-chlorination system and other improvements for the city’s Dundas Wastewater Plant. Hatch Mott MacDonald were consulting engineers.

At the east end of the harbour at the mouth of Red Hill Creek, the Windermere Basin has been transformed from a degraded industrial area into 13 hectares of wetland and aquatic habitat. The $20.6 million rehabilitation involved constructing hydraulic controls, a fishway, islands, containment dikes and landscaping. Cole Engineering were the engineers.

“Bundling” work is just a symptom

The skills shortage with public sector managers, the infrastructure deficit, and project bundling, are all related issues.

The problem is that the need for infrastructure renewal is challenging the most skilled of public sector managers, let alone those without the “real life” experience required to understand these issues. Bundling is a symptom of the problem. As municipalities struggle to find ways to approach the infrastructure deficit there is a general failure in the understanding of how such approaches will affect the availability of services. For example, as more projects go to larger firms, smaller local firms will eventually be forced out of the market place. While this may reduce costs in the short term, the lack of competition that is created by the failure of many firms will likely eventually lead to increased prices due to the resulting competition deficit. Add to this the skill and understanding deficit that results from younger, less experienced public sector managers making decisions and you have a recipe for long term decline in both infrastructure and the engineering industry that traditionally services its needs.

Two factors further complicate the issue: declining prices for engineering services resulting both from the lack of appreciation for the value of experience by less experienced public sector managers, and our industry’s willingness to accept and go al
ong with the low price trend.

The bottom line here is that if we as an industry do not promote the value of our services and begin to refuse to devalue our own worth, we will eventually become irrelevant. This will in turn lead to an eventual reduction in quality of the infrastructure that we are now renewing, leading to earlier failures of these systems and compounding the problem we now face.

The industry as a whole has a responsibility to understand these issues and come together to stem and reverse these trends for the good of both society and the engineering industry.

Nova Scotia’s utility approval board agreed in July to a 180-kilometre subsea cable “Maritime Link” from Newfoundland across the Cabot Strait into Nova Scotia.

NSP Maritime Link, a wholly owned subsidiary of Emera of Nova Scotia, is designing, engineering, constructing and financing the 500-MW transmission project. The project already received a release from the federal environmental assessment process and environmental approvals from the provinces of Newfoundland and Nova Scotia.

The link is part of a larger plan for Newfoundland to develop hydro power along the Lower Churchill Rover in Labrador, partly for export outside the province. The plans include an 824-MW power plant at Muskrat Falls that is now under construction.

A longer transmission line, the “Labrador-Island” link,” is required to bring the Churchill Falls power down from Labrador to the island of Newfoundland.

The Labrador-Island line will run for a total of 1,100 kilometres overland from Central Labrador and then underwater for 35 kilometres across the Strait of Belle Isle to Shoal Cove, Newfoundland. In late June Nalcor won an environmental release from the province for the project.

The company said its revenue growth was due to the acquisition last year of WSP, a large U.K.-based company.

SNC-Lavalin showed a net loss for the first six months of this year.

The net loss excluding its income from investments in infrastructure concessions was $86.1 million. This figure compared to a net income of $42.4 million for the first six months of last year.

In its announcement, the Montreal-based company attributed its losses partly to a $70-million claim against it for late penalties on a project in Algeria, and to a risk provision it had recorded for a project in Libya. The company’s executives suggested they are still seeking to clarify and sort out both situations.

But company revenues for the six months had increased by 4% to $38 billion compared to $3.7 billion for the same period in 2012.

A few days later the company had some good news to report. It has signed a five year contract with BMO Financial Group for facility management services in Canada, and it has successfully refinanced a project for the Restigouche Hospital Centre for psychiatric care in New Brunswick. The latter is “a milestone that reaffirms the support of the financial markets for our infrastructure projects,” said Gerry Grigoropoulos, senior vice-president of SNC-Lavalin Capital.

The 36,000 sq.ft. Christ Worship Centre in Surrey, B.C. includes a “Lobby of Light” in wood and coloured glass as the primary point of arrival. The centre includes the worship space, a fellowship hall, and also day cares, classrooms, a library, dance studio, dining area and offices. Green features include geothermal heating and cooling, and the use of bioswales throughout the parking area to cleanse and retain stormwater. Acton Ostry are architects, Fast + Epp are structural engineers and Stantec are mechanical-electrical engineers.