Consulting engineers AES saved the Vancouver Aquarium from an expensive upgrade to its high-voltage power supply by using emergency generators during peak demand. 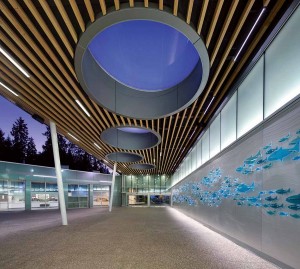 From the January-February 2016 print edition, page 22.

Timing is everything” certainly applies in the case of the most recent enhancements at the Vancouver Aquarium Marine Science Centre in Stanley Park.
The Aquarium recently completed the first phase of the largest expansion and renovation in its 60-year history. A new entrance pavilion, restaurant, outdoor plaza and green space enhancements were completed in 2014.
Further renovations will increase the indoor exhibit space and expand the pool areas by approximately a half. There will also be new offices, laboratory and other support spaces. With such an extensive expansion ahead, it seemed that the electrical service might need to be upgraded also.
Just as this multi-year project was starting, BC Hydro was embarking on a major distribution upgrade in the area that involved burying power lines and preparing to double the voltage from 12.5 to 25 kV. Since unacceptable power outages during the Aquarium’s busiest time — the summer months — had to be addressed as part of the project, the utility’s improvements may appear to have been timed perfectly.
However, in order to design and implement the upgrade to suit the Aquarium schedule, BC Hydro’s bill estimate to the Aquarium (millions of dollars for more than three kilometres  of buried duct and cable, plus even more for the service size and/or voltage upgrade) was definitely not in the project’s budget.
The Aquarium required a quick and cost-effective solution. AES Engineering was called in after the Aquarium had started on pre-work for the expansion, but before final design documents were in place.
AES conducted an in-depth review of the complex’s current and future power requirements, and determined that an electrical service upgrade prior to Hydro’s future distribution upgrade was not really necessary.
Optimizing the facility’s electricity use was an obvious first step. The Aquarium had a three-phase power system that was not being used effectively, says Kevin Cheong, P.Eng., senior associate at AES. If one of the three phase lines was overloaded, he explains, the whole system would shut down, even if the other two lines had capacity remaining. Up to a third of the power supply available was not being fully used.
An estimated 20% savings in power usage was gained by phase balance techniques and efficiency improvements in lighting, cooling, pumping, etc., combined with optimizing the way the existing capacity was used. More specifically, this optimization included improving the poor power factor; eliminating harmonics (capacity being used to make noise); and scheduling and timing discretionary loads so that they didn’t coincide. To avoid a loss of these gains due to subsequent alterations at the Aquarium, the optimization system is automatic and dynamic.
“They didn’t really need to upgrade to higher voltage or greater current — it’s only during their peak season that they run out of power,” Cheong says. The Aquarium’s busiest time is in the warmest months of July and August, and the AES analysis showed that additional power was needed only “for cooling guests and fish for typically six hours a day for typically six weeks.” Since the back-up generator was due to be replaced, and was going to be moved to make room for the expansion in any case, AES designed the system to use two upgraded emergency generators for peak shedding.

Peak shedding using emergency generators
“We automated the system so the generators kick in to take some of the load,” Cheong says. This parallel, modular, scalable emergency generator system automatically and seamlessly takes some of the load off the utility service during peak load periods. The initial generators are two 800 kW diesel units, with provision for up to two more. They are also highly “sound attenuated” as they are intended to run during the day when guests are present, and they are “vibration isolated” to prevent the fish and marine mammals from being disturbed.
Conventional emergency power systems focus on delivering power to systems to permit safe evacuation in an emergency, Cheong says. But at the Aquarium, where emergency lighting and fire alarms are all run on batteries, back-up power focuses on a number of other operations. He compares it to a modern airport, where the primary concern is “business continuity.”
The system is programmed to recognize that the animals take priority in all circumstances, and switches to “extended outage mode,” focusing on keeping fish alive. There is enough generator fuel to keep chemical treatment, filtration, oxygenation, water temperature etc. at the required levels for about 40 hours.
“The increased cost of the already planned generator upgrade to permit the peak shedding was about a quarter of a million.” Cheong says. The Aquarium has probably saved $4 million already because much of BC Hydro’s upgrade work in the neighbourhood is occurring — without the Aquarium having to pay for it. “By deferring the upgrade, they actually avoided a significant portion of the cost,” Cheong says.

Power system quadrupled
With automatic power quality and load-balance correction equipment installed in the expanded exhibit area. support spaces and existing building, and with the first two generators installed and automated, the facility’s back-up power system has quadrupled in size. Most important, though, the Aquarium has gone through its first full summer using the new system, without running out of power.
The scalable generation system can be added to in the future should the Aquarium wish to increase the available power during utility outages.
“Allowing the Aquarium to complete the expansion — without using up critical budget for an unplanned and ultimately unnecessary service upgrade — by combining a variety of sophisticated yet cost-effective technological solutions, was the equivalent of finding ‘There’s an app for that — only you have to customize it for your own particular situation,’” Cheong says. “It was challenging, fun, and since it worked without significant change orders, it was also rewarding.” cce