Since the great Ice Storm devastated eastern Canada, Ontario Hydro and Hydro-Qubec have been hard at work looking for ways to avoid a similar disaster.For two of North America's largest utilities, th... 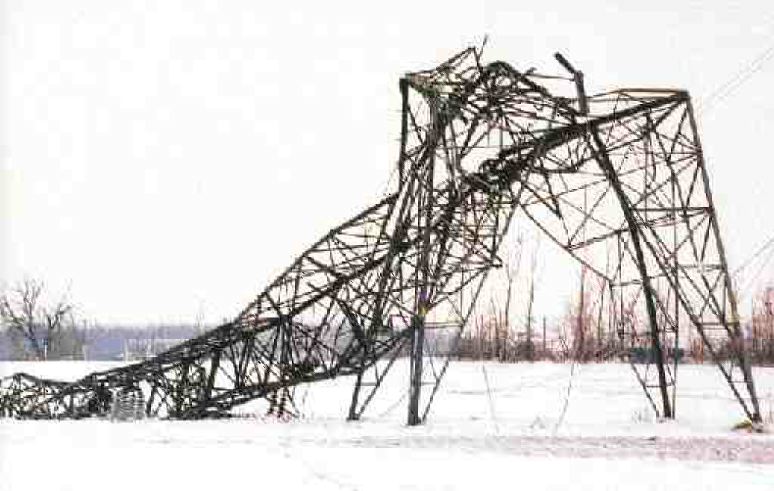 Photograph by Robert Skinner, La Presse. From The Ice Storm, a collection of press photographs of the event with a text by Mark Abley, published by McClelland & Stewart, 1998.

Since the great Ice Storm devastated eastern Canada, Ontario Hydro and Hydro-Qubec have been hard at work looking for ways to avoid a similar disaster.

For two of North America’s largest utilities, the Great Ice Storm of 1998 was a chilling experience in more ways than one. Coils of fallen wire and cable, piles of wood from downed poles and crossarms, and heaps of twisted metal from crumpled pylons contributed to damages costing approximately $140 million for Ontario Hydro and $800 million for Hydro-Qubec.

It was evident after the storm that hydro lines and supporting structures that had been built to older standards and never upgraded didn’t fare as well as those built to newer standards. In Ontario, specifications for pylons were upgraded after a bad ice storm in 1961. During the 1998 storm most pre-1961 towers collapsed, taking out large parts of the feeder grids. In the Rideau region, for example, poles on a section of the distribution network had been slated for replacement 15 years ago. Presumably to save costs, Ontario Hydro had not changed them and most snapped during the 1998 event. The one high-voltage line that collapsed in Ontario was built in the 1930s.

Detractors of Hydro-Qubec have said that the utility’s power system may have disintegrated so quickly because it was propped up by outdated pylons, some so old they should have been replaced 20 years ago. Nearly 80 per cent of the high-voltage towers that collapsed in the storm were over 40 years old and some were as old as 70.

Certainly, as the utilities were quick to point out, they were coping with such extreme conditions they could not have been foreseen by their engineers. Ice Storm 98 was unprecedented in size and scope. Not only was the area affected huge (over 30,000 square kilometres in Ontario alone) but the amount of precipitation and length of time that the freezing rain fell have never been experienced before in this country and may never be seen again. Weather factors, of course, cannot be controlled by humans. The next best thing is for us to learn from the storm and put into place measures to mitigate the impact of a similar event in the future.

Both utilities held internal investigations after the event, and over the past year have been studying how to prevent a repeat disaster. Following are some of the recommendations.

Increased standards for ice loading. As a result of the large-scale failure of much of its network, Hydro-Qubec quickly announced plans to upgrade its line load carrying capacity and the capacity of its pylons to hold 65 millimetres of ice (up from 50 millimetres). This change will represent an increase in cost of approximately 15 per cent.

Anti-cascading pylons. According to an internal Hydro-Qubec report, “It is recommended that the high-voltage transmission system be made sturdier by a series of appropriate measures at strategic points along the system. Adding anti-cascading towers will be one of these measures.” Built to a higher ice-loading standard than others, anti-cascading towers are strategically located along a right-of-way and stop the domino affect by limiting the collapse in series to 10 towers at most.

Undergrounding. According to Ontario Hydro, while most experts agree that running high voltage transmission lines underground would solve the icing problem, the option is extremely costly. However, Hydro-Qubec’s distribution team found that a design used in Germany for a type of underground installation “is half the cost of the corresponding Hydro-Qubec underground design.” According to the utility, “research efforts should be devoted to adapting and enhancing such techniques to the Hydro-Qubec system and environment.”

Redundant lines. Ontario Hydry says it plans to re-evaluate its planning criteria regarding sub-transmission routes and structures, and will look at different technologies for alternate and redundant lines. During the storm, some people suggested that the systems should have more redundancy built in. Ontario Hydro notes, however, that redundancy may not have the desired benefits when vast weather systems affect large areas: “The redundant supply is subject to the same weather condition, meaning it will be taken out of service to the same degree as the main supply.”

Reinforcement. Since the storm, an $815 million reinforcement program has been initiated by Hydro-Qubec. Such programs include measures like adding redundant lines or entirely new interconnections, and boosting the robustness of poles and pylons. Hydro-Qubec’s strategy is that at least 50 per cent of peak load be maintained under storm conditions comparable to those of January 1998 for all important blocks of load; and that every 735kV substation be fed by at least one strategic line.

In order to draft its internal report, Hydro-Qubec’s committee heard presentations on the utility’s research and development program. Along with the German method of undergrounding, the committee considered the most important measures worth investigating to be:

De-icing. Power lines can be de-iced through the electrical heating of conductors. Hydro-Qubec states that, “while such a method is being used for voltages of 120kV and below, to the committee’s knowledge it has yet to be developed for higher voltages. It is understood however that de-icing has been developed for voltages above 120kV in Russia.” They say de-icing should be investigated.

Wind and ice-loading models. The Hydro-Qubec committee said it was impressed with the utility’s extensive ice data collection program which had produced 23 years of records. However, the committee also stated that the data is of insufficient accuracy and quantity to predict the return period of an event like Ice Storm 98. The committee concluded that “greater attention should be paid to improving the reliability of the measuring methods.”

Grounded shield wires. According to the Hydro-Qubec report, “While overhead ground shield wires are necessary for the protection of lines against lightning strikes, under icing conditions they are a frequent cause of outages [as they sag and touch energized lines]. This dilemma needs to be resolved as quickly as possible.”

Inspection, preventive maintenance and construction record keeping. Hydro-Qubec has said that its quality control and maintenance programs need to be improved, and that ongoing inspection should be focused on assets that survived the storm in order to ensure their integrity. It added that in many instances it was not able to determine whether a given supporting structure was constructed according to design because of a lack of records. Ontario Hydro also concluded that “improvements are required in collecting information, performance measures and [putting] a process in place to better manage the assets in an integrated fashion.”

Two considerations may dictate whether attempts to mitigate the effects of future storms are a success or a failure–cost and NIMBY.

The cost equation relates to the outlay incurred by utilities to improve their systems, and the expenses passed on to consumers as a result. According to Ontario Hydro, each $1 billion of new capital investment generates approximately $100 million of annual costs to carry the debt, plus operating and maintenance costs every year for the life of the facility. Eventually, these costs have an impact on the utility bills being paid by customers.

The NIMBY (“Not in my back yard”) syndrome often comes up in communities when a proposal is tabled to locate a dump, chemical plant, psychiatric centre or like facility in their area. Hand-in-hand with NIMBY is land expropriation, often a necessity when building highways, rail lines, hydro right-of-ways etc. Reinforcing parts of a hydro grid could be easily done, but would involve making changes that are aesthetically displeasing, e.g. doubling a row of pylons running through a farmer’s field, adding guy wires to a pole located on someone’s front lawn, or stringing a new line through a residential area. Societal pressure can be more than enough to have a project shelved.

The common denominator of these two issues may come down to the age-old paradox of wanting to have one’s cake and eat it too. At what cost–both from dollar and societal perspectives–should major utilities prepare for an event such as Ice Storm 98? Are setting out engineering design, manufacturing and construction standards and laying down emergency plans for a once-in-50-years event enough, or should major utilities go further and prepare for a once-in-100 or once-in-500 years event? And who will pay for it?

According to Ontario Hydro, “Only the electricity-buying public can make the decision.” But perhaps the real decision lies with Mother Nature.

Glenn McGillivray is head of corporate communications at the Swiss Reinsurance Company Canada. The above is an adapted version of an article that appeared in the company’s review.