Jury Comments: “This was an urgent, high-risk project, and its execution protected workers, the public and the environment in an exceptional way. The engineers’ work involved assessing and remediating a large former gold mining site, where a variety of hazardous materials had to be removed, notwithstanding that some of the buildings were near collapse.” 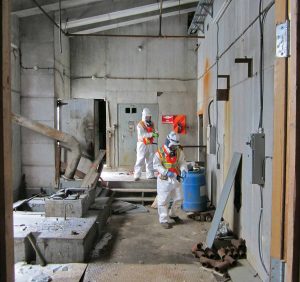 The Giant Mine in Yellowknife, Northwest Territories, operated from 1948 to 1999 producing over seven million tons of gold. When the mine operator declared bankruptcy in 1999, control of the mine was transferred to Canada’s Department of Aboriginal Affairs and Northern Development Canada (AANDC).
The ore processing methods, housed within the roaster complex, generated sulphur dioxide gas and arsenic trioxide particulate. The complex, with a footprint slightly smaller than a football field, comprised two roaster buildings, a calcine/kiln plant, an electrostatic precipitator building, a baghouse building, a 46-m high stack, and other ancillary structures. At the project initiation, the buildings, known to contain significant quantities of arsenic trioxide dust, asbestos, cyanide, and other hazardous materials, were at risk of collapsing and releasing hazardous materials to the environment.
AECOM and sub-consultant Golder Associates were retained by Public Works and Government Services Canada to do work that included a detailed hazardous material survey and waste audit; prepare contract specifications; and complete resident engineering during decontamination and deconstruction of the roaster complex.

Developing standards for an urgent task
Assessing and demolishing such a highly contaminated complex was a challenge.
Hazardous waste identified included: arsenic trioxide dust, asbestos (amosite, chrysotile and crocidolite), cyanide, mercury, PCBs, hydrocarbons and other hazardous substances. Most importantly, almost all of the waste consisted of arsenic, asbestos, and cyanide mixed together. Hazardous waste abatement control measures needed to be developed to address the simultaneous removal of the materials from the buildings and an ambient air quality monitoring program was developed to protect the public.
The project adopted the same well-established abatement control measures for arsenic and cyanide as for high-risk asbestos abatement work, with air monitoring for all three contaminants, but with additional measures to address the increased risk.

Environmental review and storage
The remediation was subject to an ongoing Canadian Environmental Assessment Agency (CEA) Environmental Assessment because of significant concern from stakeholders. The site lies within the city limits of Yellowknife on the shore of Great Slave Lake.
The work proceeded under emergency provisions in advance of the environmental approval and was conducted in a fully transparent manner with all the ambient air monitoring results posted on a public registry.
Completed in 2015, the project safely dismantled all structures and containerized over 9,000 cubic metres of the hazardous waste without adverse effects to workers, the public and the environment. The result is a much higher level of trust by regulators and the community for the overall remediation program for the Giant Mine.

Related Stories
Giant Mine toxic dust to be stored underground with artificial freezing
Mount Polley mine allowed to resume operations
Consulting engineers on team for $1.3 billion Diavik diamond mine
B.C. refuses to give environmental approval to gold and copper mine