After doing an extensive study of flood prone areas of the Assiniboine River and Lake Manitoba basins KGS Group went on to analyze and conceptually design scores of solutions. 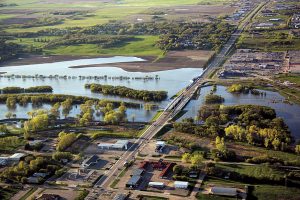 Aerial view of Assiniboine River in Brandon, Manitoba during the 2011 flood. Photo: Manitoba Infrastructure and Transportation.

Since the “Great Flood” of 1950, Manitoba has proactively developed an extensive integrated flood protection system. In spite of this commendable history of flood protection, there have been floods that have caused damages in the drainage basins of the Assiniboine River and Lake Manitoba, notably the floods of 2011 and 2014.
To address large floods in the Assiniboine and Lake Manitoba drainage basins, the Province of Manitoba retained KGS Group to carry out a study of flood mitigation. The study was complex. It covered a drainage area that exceeded 246,000 square kilometres and extended into two other jurisdictions: the Province of Saskatchewan and the State of North Dakota.
In collaboration with Manitoba Infrastructure and Transportation, KGS Group conducted a comprehensive analysis of the interconnected flood system, including the Assiniboine, Souris and Qu’Appelle Rivers, Lakes Dauphin, Winnipegosis, Manitoba, and St. Martin, and the City of Winnipeg.
The preferred flood mitigation options that were identified during the study, which combined have an estimated cost of approximately $1.1 billion, would significantly help to reduce water levels and damages in future floods. Furthermore, the recommendations of the study can serve as the foundation for major flood mitigation programs on the Assiniboine and Lake Manitoba River Basins for the next several decades.

Identifying priority areas
for new protection
Our study determined the existing flood protection levels of different locations across the study area and identified those that did not meet the applicable provincial flood protection policies. The protection level for each area had to exceed one or all of the following measures:
(1) The 1:200 year event, which was adopted after the 2011 flood and was greater than the previous 1:100 year standard.
(2) The highest flood on record, if greater than the 1:200 year event.
(3) A greater flood event that could be justified in an economic analysis that considered costs and benefits.
The Lower Assiniboine River between Portage La Prairie and the City of Winnipeg was found to be the highest priority area as it has infrastructure that would be vulnerable at flood magnitudes much less than both the largest flood on record and the 1:200 year event.

Developing the options
Various options for providing more flood protection, including standalone projects and combinations of projects, were considered to increase the level of protection in areas that did not meet the provincial standard. In total we evaluated over 70 mitigation options of both non-structural strategies and structural options. They included dikes, small and large reservoirs, diversion channels, wetland restoration, development controls, and modifications to land use.
Conceptual designs and cost estimates were prepared for each of the options, followed by an assessment of benefits as well as environmental and social impacts. The assessment considered not only the flood fighting costs and the cost of flood damages and repairs, but also intangible damages such as stress and anxiety caused to local residents, property owners and people engaged in the flood event response.

Lower Assiniboine River
Various schemes with different capacities were considered for the existing 150-km provincial linear diking system on the Assiniboine River downstream, east of Portage la Prairie.  When combined with upgrades to the Portage Diversion (see below) the improved dikes would provide a flood protection level of at least 1:200 years.
The cost of the most feasible option, which consisted of upgrading the existing dikes generally in their current location, was estimated at approximately $270 million. Providing design flows of 655 m3/s, this option would mostly entail raising and flattening the dikes to achieve modern design standards and provide sufficient freeboard, as well as constructing access for long term maintenance and repairs. Downstream of the diking system, from approximately Baie St. Paul to the city of Winnipeg limits east of Headingley, a combination of individual flood proofing, neighbourhood dikes and the purchase of vulnerable properties severely affected by flooding was identified as the most feasible option, at an estimated cost of approximately 60 million.

Portage Diversion
Expanding the Portage Diversion, a man-made channel approximately 29 kilometres long which diverts water from the Assiniboine River north into Lake Manitoba, was determined to be a leading option for reducing potential flooding in the Lower Assiniboine River region. Three concepts were considered: widening the existing channel; constructing an additional channel parallel to it, or a “retrofit.”
Based on the conceptual designs the retrofit option was identified as the preferred alternative, since it was the most economical. The concept consists of upgrading the existing channel by raising the channel dikes and its seven bridges, and expanding or reconstructing its control, drop and outlet structures. The cost of the upgrades was estimated at approximately $370 million. It would increase the capacity from 708 m3/s to 960 m3/s.