During the night of July 6, 2013, a freight train carrying Bakken crude oil derailed in the heart of downtown Lac-Mégantic in the Eastern Townships of Quebec, resulting in a spill of approximately 6 million litres. 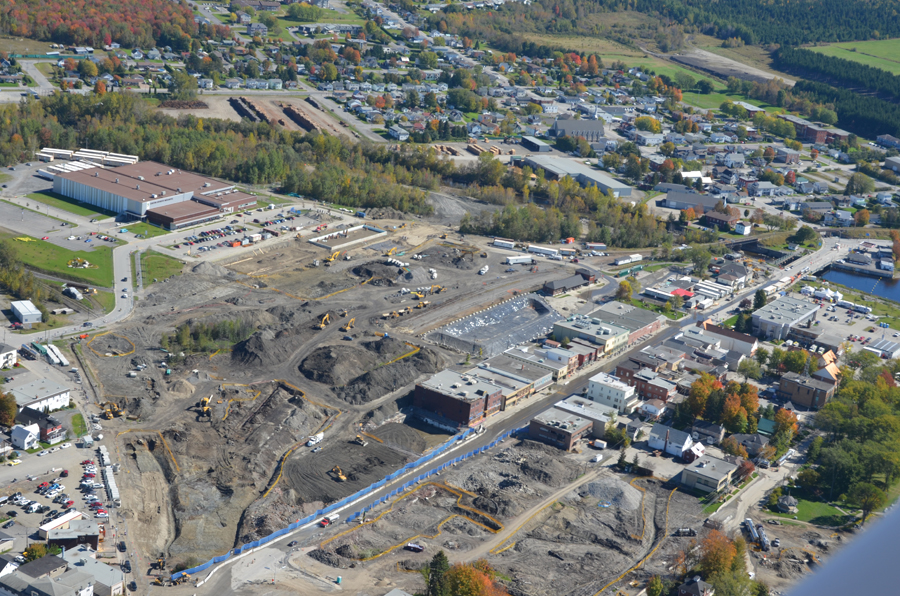 During the night of July 6, 2013, a freight train carrying Bakken crude oil derailed in the heart of downtown Lac-Mégantic in the Eastern Townships of Quebec, resulting in a spill of approximately 6 million litres.

The oil ignited and caused a series of explosions that lit up the sky. The massive fire destroyed part of the city centre. Forty-seven people lost their lives.

The impact on the environment began immediately and was widespread. Most of the spilled oil was burned in the fire. However, a portion of the oil seeped into the soil and reached the shallow groundwater aquifer. A few hundred thousand litres of oil migrated to the surface of the impact zone, entered the stormwater manholes and spread through a large portion of the sewers. Oil reached Lake Megantic and the Chaudière River through storm sewer outlets, as surface run-off, or through subsurface fill material. Strong southwest winds pushed some of the burning oil floating on Lake Megantic onto the riprap-protected shoreline of Parc des Vétérans.

The following day, July 7, Montreal, Maine, and Atlantic Canada (MMA), the railway’s owner, contracted Golder Associates to act as the environmental consultant to support the emergency operations in the town and to assist with clean-up operations on the river and lake.

A month later MMA filed for bankruptcy protection and the Government of Quebec appointed the construction firm Pomerleau as the general contractor responsible for the remainder of the clean-up operations. Golder’s contract was renewed by Pomerleau starting August 10, ending December 31, 2013. Within a six month timeframe, the multi-party effort had achieved the emergency remediation plan objective for securing the area of the City of Lac-Mégantic impacted by the accident.

Golder’s mandate was: (1) to recommend emergency measures to eliminate the migration of contaminants to water bodies; (2) to perform a site characterization of the area affected by the spill; (3) to develop an emergency remediation plan to secure the area for the winter season and manage surface run-off for the remainder of the site clean-up; and (4) to perform a site characterization of the aquatic environment in the bodies of water.

The work required a high level of collaboration among the various levels of government, the fire department, Sûreté du Québec, and the contractors. It meant mobilizing a large French-speaking team in a very short period of time. Approximately 230 Golder employees were involved in the project, including 45 at the project site.

During the first weeks after the derailment the primary concern was to stop the migration of hydrocarbons into Lake Megantic and the Chaudière River. This was of particular concern since municipalities located downstream on the Chaudière River were forced to find other water sources while the risk of hydrocarbon contamination in the river remained high. Even the city of Lévis, situated more than 100 kilometres downstream of the spill, was affected. If the situation could not be quickly rectified, the municipalities would have needed to plan major changes to their public works. Golder and the Ministère du Développement durable, de l’Environnement et de la Lutte contre les changements climatiques (MDDELCC) site team had to quickly determine the hydrocarbon migration routes and the means to eliminate them.

In early August, an emergency remediation plan was developed to secure the site and to manage the anticipated storm run-off for the remainder of the clean-up effort.

A critical aspect was the need to accommodate the simultaneous reconstruction of the destroyed rail lines and the development of new commercial buildings along the new extension of Papineau Street. The latter were to replace commercial space that had been destroyed in the fire.

The emergency remediation plan required that a vast soil and groundwater characterization program be performed, which took place until October 28, 2013. This work required digging 320 exploration trenches, 116 boreholes (84 of which were converted into monitoring wells), and taking 1,200 soil samples and 125 groundwater samples which were sent to the laboratory for analysis.

Choosing the parameters for the analysis became complicated given that fire-retardant foam was used to extinguish the fire. The nature of the spilled crude oil and the resulting fire further complicated the choice of parameters. The characterization program included defining the detailed composition of the oil exposed to heat, as well as the oil that had seeped underground.

The remediation plan also required characterizing building foundations. The entire sewer system was inspected by camera to determine its state, and 32 recovery wells were installed in the granular backfill of the underground pipes to determine the level of contamination.

The results were used to create a conceptual model of the contamination’s migration (figure p. 13), which in turn served as the starting point for all subsequent emergency interventions and work.

The remediation work consisted of the excavation of contaminated soils and the pumping of free-phase hydrocarbons and contaminated water that had migrated to the surface or through the preferential flow paths.

Most of the excavation work was completed between September 9 and December 20, 2013, and was primarily undertaken in parallel with rebuilding operations and the return to service of utilities and infrastructure such as railroads and municipal sewer lines. Three temporary soil storage platforms — with a total capacity of approximately 25,000 m3 to 30,000 m3 — were built on a city lot in the industrial part of town.

In total, there were 23 excavations, with the largest excavation in the impact zone, where a 1,200-mm diameter stormwater sewer was replaced and the railways were rebuilt. Significant excavations were also located near the Papineau Street extension and at the access point for a planned bridge. Other excavations were realized for: (1) the decontamination of low points at the city’s wharf and along the edge of the dam located at the mouth of Megantic Lake along Frontenac Street; (2) to isolate certain buildings whose foundations showed potential for products to migrate underneath them; and (3) to proceed with the emergency replacement of underground lines.

In total, about 57,250 m3 of contaminated soil was excavated and stored for future treatment, representing about half of the volume of contaminated soil that had been initially estimated by the MDDELCC. A mass of debris and other residual materials (13,110 metric tons) had to be disposed of to an MDDELCC-approved disposal site.

As a result of the 2013 remediation work it was possible to remove a large part of the recoverable free phase. In total, about 49,494,000 litres of oily water and oil were recovered and treated from July 6 to December 19, 2013.

Finally, a run-off water management plan was implemented to reduce the risk of surface water bodies be
ing contaminated and of the excavated zones being re-contaminated. The remediation work included oil and water recovery trenches, as well as pumping stations to redirect the water to the oily water treatment unit installed on site.

Hundreds of surface and sediment samples were taken and inspections done along 120 kilometres of the Chaudière River. Inventories were also taken of fish to evaluate the health of 30 different species. These included taking fish flesh and liver samples. Golder was required to index, identify and dispose of dead fish as well as recover all aquatic birds that had been affected by the contamination.

An ecotoxicology study of the river was used to identify the sections that required priority monitoring in 2014.cce