MININGThe discarded serpentine tailings from decades of asbestos mining have created a "lunar landscape" that stretches for eight miles near the town named after the mineral north of Sherbrooke, Quebe... 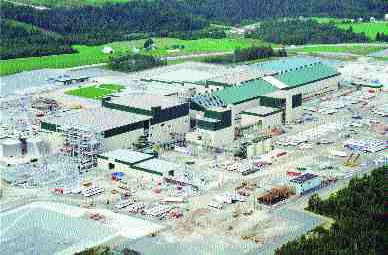 The discarded serpentine tailings from decades of asbestos mining have created a “lunar landscape” that stretches for eight miles near the town named after the mineral north of Sherbrooke, Quebec. Now the tailings are being mined themselves for magnesium as part of an innovative and huge project under the direction of SNC-Lavalin.

To extract the magnesium in Asbestos, the Magnola plant uses an electrolysis process that Lavalin engineers and Noranda developed in the 1980s. The tailings are leached in hydrochloric acid, creating a brine from which the magnesium is extracted using electrolysis.

While it cannot be called recycling, the process uses what would otherwise be left as waste (the asbestos mine is still active), and all the effluents are recovered and re-used. However, George Rode, P.Eng., project manager for SNC-Lavalin, suggests the real beauty of the project is that they are sitting virtually on top of the resource and don’t have to transport it in. There is enough raw material, he says, to last probably for 100 years.

The second largest construction project in Quebec, the Magnola project had 1,500 people on site at the peak. With SNC-Lavalin in charge of project management, engineering, procurement and construction management, the project is on a fast track schedule. Construction is 80% complete, a cogeneration plant will soon be started up and the first eloctrolysis cells are due to start in June.

The $730 million plant will be the largest producer of magnesium in the world, generating 60,000 tonnes annually or 20% of the world’s supply. The magnesium alloys are used mainly in car parts and for pressure moulding pieces.