Panelist at ACEC conference spells out impacts of globalization and environmental movements on companies and their employees.

If anyone has the experience and ability to see the big picture when it comes to changes occurring in the consulting engineering industry in Canada, it is John Boyd, P.Eng.

Boyd worked for Golder Associates for 35 years, in senior management positions for 20 years of that time. He was president of the International Federation of Consulting Engineers (FIDIC) in 2007-2009, and is currently a member of its Sustainable Development Committee. He is also a former chair of ACEC-Canada, and was global practice lead for infrastructure in Canada’s Department of Foreign Affairs and International Trade for two years ending November 2014.

Boyd was a speaker on a panel at the ACEC-Canada Leadership Summit in Niagara Falls, Ontario on June 12.

Boyd said there has been a fundamental shift in how consulting engineers relate to clients and their work. Until the mid-1990s, he said, consulting engineering was an inward-looking business, where you concentrated on completing projects on time and on budget.

But with the surging environmental movement, engineers now have to concern themselves with other societal and environmental matters beyond the strictly narrow execution of a project. They have to look at minimizing the use of energy, water and materials and minimize greenhouse gas emissions. They also look after the health and safety of the worker and the project’s eventual users, and they have to concern themselves with issues related to human rights.

Obtaining environmental permits and licenses for projects is another huge part of almost every engineer’s project, said Boyd.

All this adds up to a situation where the engineers’ success today has as much to do with “portraying the desirability of the project” as the technical side, Boyd said.

This situation presents an opportunity, “but also a challenge” — and it’s a challenge that engineers need to be better equipped for.

First there are many more universities around the world that are producing well trained engineers, compared to the historical focus which was on graduates from western universities.

And whereas historically Canada has had an advantage in obtaining international work, he suspects that in future the “edge” in engineering will be outside Canada. The challenging projects are being built in Asia, South America and Africa.

Another trend is that international engineers are very interested in becoming more business-savvy. For example, FIDIC is running a pilot project with Chinese engineers, running two-week courses continuously, “all day, every day” for 500 people. The courses are expensive, but there is heavy demand for them, Boyd explained. The individuals who pass the course will be certified by FIDIC. The pilot is being closely watched by engineers in Korea, India and other parts of Asia.

In Canada, he noted, the growth of internationalism is evident in the many public-private partnerships (P3s) that have foreign financing. Engineering firm ownership is increasingly transnational, with Canadian companies being sold to British, Spanish as well as U.S. firms, and Canadian companies buying foreign companies.

The “industry has become globalized … and even in the Canadian market we effectively compete in international markets,” he said.

Besides his other roles, Boyd is a partner in Design Firm Seminars. He was speaking on a panel with Brian Watkinson of Strategies 4 Impact! and James S. Paul, president and chief executive officer of Defence Construction Canada. 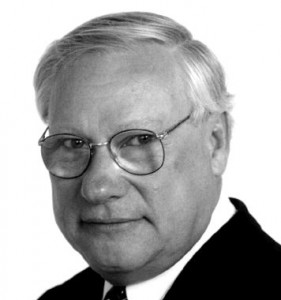 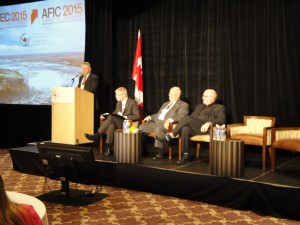