Young professionals learn that “your competitor is not the enemy”

Representatives of YP groups from provincial consulting engineering associations reported on their activities at the YP Professional Forum at the ACEC Summit in Prince Edward Island on June 21. 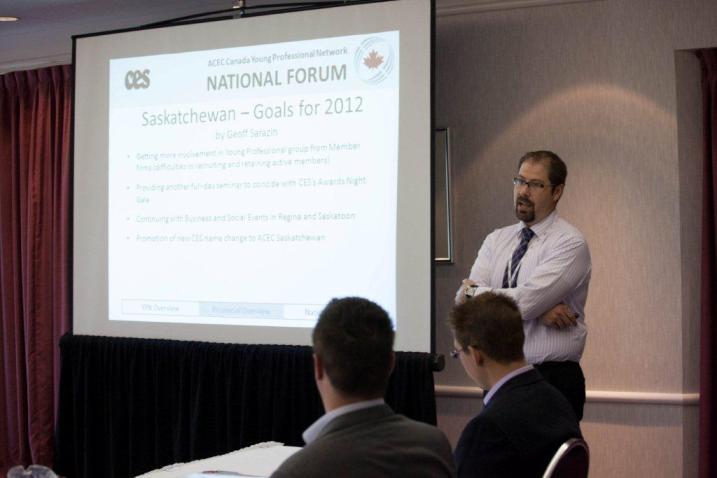 Representatives of YP groups from provincial consulting engineering associations reported on their activities at the YP Professional Forum at the ACEC Summit in Prince Edward Island on June 21.

After giving reports of the different events and activities they had held over the past year, the young professionals engaged in a study and discussion session on business networking. Michael Egberts of Ontario led the discussion with eight rules that he had gleaned from business articles. The eight rules of successful networking were:

2. Don’t confuse people with your pitch

5. Avoid being socially inept (“this is obvious”)

The young professionals also talked about social media and whether it was an effective tool for networking. Generally they agreed that while smart phones made you feel connected, they make it difficult to maintain meaningful long-term relationships. They briefly discussed Twitter and Facebook, and whether it was wise to be discussing projects on these social media, but decided against it.

One young professional said that they had found having a strong interest in a sport helped him to engage with clients. Another said it was important to build up a client’s trust. If you say you can do something, then you must “really mean it.”

They agreed that relationships “get you through tough times,” and that they are “really important to your success.”

The young professionals also discussed how it is important to meet other YPs from other firms at ACEC and similar events. “You need to know your competitor is not the enemy.”

Simon Davidson, a transportation engineer with Roche of Quebec moderated the YP session. It showed how these young professional groups of consulting engineers are growing from strength to strength.

To build membership, they are holding events that cover everything from technical tours (“really, really cool”), to public relations (building a Rube Goldberg machine in a mall), to professional development breakfasts, to curling and pub nights.

Unfortunately, of the 20-plus YPs at the ACEC Summit, only a couple of them were female.