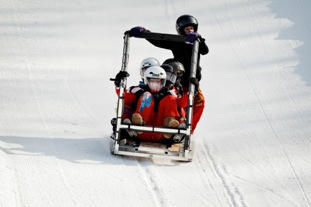 Concrete Toboggans commandeered by engineering students sped down the slopes at Glen Eden Ski and Snowboard Centre in Milton, Ontario on January 29 and 30.

However, none were faster than the all-female team by the host university, McMaster. The McMaster Outlaws achieved a speed of 62 kilometres an hour on a 500-foot downhill slope.

The students have to design a rig that has a concrete running surface and a metal frame, with a functioning brake, steering, and a roll cage to protect the riders.  The toboggan carries five riders and must weigh no more than 300 pounds.

The University of Calgary’s team “The Night of the Living Sled,” won the competition’s first King of the Hill competition.