Consultants are helping to fine-tune the technologies 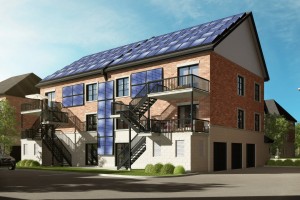 Ground has just been broken on the last of a series of projects being built across the country to demonstrate that commercial home-builders can build net-zero energy homes.

Net zero energy (NZE) buildings are among the most extreme “green” designs since they produce as much energy as they consume. They’re essentially self-sufficient in terms of energy. However, while individual NZE buildings have been realized as special one-off projects, this NRCan-sponsored project is designed to show how they can be built on a much larger scale by commercial home builders.

As the project proponents point out: “NZE homes continue to be stuck in a research and development phase and pilot demonstrations, with little focus on the unique challenges that the housing platform presents for the production builder. To achieve wide acceptance and industry adoption, a community-sized demonstration by production builders is critically important.”

Enter this project which is being spearheaded by NRCan’s ecoENERGY Innovation Initiative and Owens Corning Canada. In total over $4 million in funding and in-kind contributions is being provided.

The program involves five developers in four provinces. Each builder is constructing a set of NZE homes, to a total of 25. The focus is on conserving energy by maximizing the building envelope’s air tightness, along with the use of renewable energy technologies. So far they have photovoltaic panels to generate electricity, along with a hybrid heat-pump water heater. The PV panels are on the roof, and in one case on the facade. Other renewable technologies are being explored as the buildings progress.

buildABILITY Corporation is the lead consultant managing the overall project for Owens Corning Canada. It has five building science and technical consultants which are working to fine tune the different developments. The technical subconsultants are Ameresco (for Construction Voyer in Quebec); MMM Group (for Mattamy Calgary in Alberta); Building Knowledge (for Reid’s Heritage Homes in Ontario); Leidos Canada (for Minto Group in Ontario); and HAWK-EYE for Provident Developments in the Atlantic Provinces).

The first series of homes began construction last September in Guelph, Ontario. Built by Reid’s Heritage Homes. Its PV system will generate around 11,000 kWh a year. The last series that just broke ground is by Construction Voyer in Laval, Quebec. It is a series of six condominiums. The others are all single family homes.

The EnerGuide Rating System will be used to measure the homes’ energy use. And in many cases the new R-2000 requirements are being employed. Construction is expected to be completed by 2016.