First high-rise tower in 20 years shapes up in Edmonton

The 28-storey EPCOR Tower adds an impressive new profile to Edmonton's downtown skyline. But as construction... 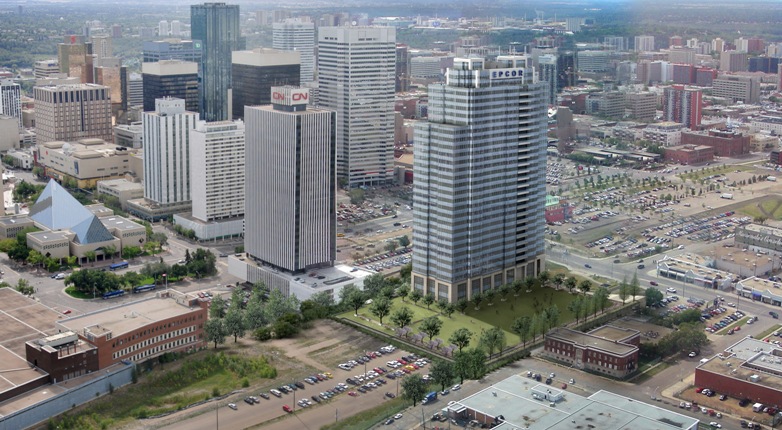 The 28-storey EPCOR Tower adds an impressive new profile to Edmonton’s downtown skyline. But as construction proceeds towards completion in the fall of 2011, given the economic boom in the province just a few years back, it may surprise observers that this $200-million project is the first high-rise office tower built in the Alberta capital in more than two decades.
The anchor tenant will be city-owned EPCOR, a supplier of water and wastewater services in Edmonton and other communities, and also an electrical-transmission and distribution utility. A separate publicly traded company, Capital Power Corp., established in 2009 to manage EPCOR’s’ former power-generation assets, will also be a major tenant along with the federal government.
Situated just north of the current downtown core and near Edmonton’s iconic city hall, the new tower overshadows the nearby 44-year-old Edmonton CN Tower, once Western Canada’s tallest office building and home of Edmonton’s VIA railway station.
When the tracks were relocated from downtown, it freed land for development, including Station Lands, held by developer Qualico. The developer foresees this 9.14-acre parcel eventually containing some 2.5 million square feet of multi-use high-rises. EPCOR Tower, with 623,900 square feet of leaseable space, represents Phase One of Station Lands development.
The EPCOR tower is designed for integration with future Station Lands towers, for example, via cogeneration and district heating. For now, the undeveloped area has proven invaluable to EPCOR Tower builder Ledcor Construction for staging, ramping and a stormwater pond.
Kasian Architecture Interior Design and Planning is the prime consultant for EPCOR Tower, with AECOM serving as lead (structural, mechanical, electrical and civil) engineering consultant. Other consultants include: Building Science Engineering (building envelope), Integrated Designs (energy modelling), Leber Rubes (building code), Bunt and Associates (transportation), EIDOS Consultants (landscape architecture) and Stantec (LEED commissioning).
Rather than bringing aboard some consultants later in the design process, Ken Cantor, commercial manager at Qualico, explains that “one of the most forward-looking things we did was to engage a full design team early on in the process. We had all the team members at the table at the beginning.”

Green features include earth tubes
With its strong commitment to sustainability, EPCOR insisted that its new headquarters should meet at least LEED Silver accreditation. That standard has been exceeded in most areas, says Cantor, and LEED Gold is anticipated. Canada’s selection team for International Initiative for a Sustainable Built Environment (iiSBE) has picked EPCOR Tower as a poster project for next year’s Sustainable Buildings 2011, in Helsinki, Finland.
Not only did the anchor tenant seek a green design, but, Cantor notes, other factors “allowed us to do some interesting things.” Notably, the tower is directly above the easement of an expansion (26 metres below grade) of Edmonton’s light-rail transit system. While the tower design accommodates a four-level parkade with 913-stalls, the designers decided to lower the raft foundation to just above the base slab of the LRT cavity. The 3,800-cu. m concrete raft slab (resulting from a 16-hour continuous concrete pour) created a void space below the parkade. This space accommodates earth tubes, which provide heat transfer to pre-cool and pre-heat the building’s outdoor air. These and other energy-saving measures, states AECOM’s Jillian Pederson, P.Eng., mean “the building is expected to achieve a 28.8%. energy-cost savings and a 41.4% energy savings compared to ASHRAE Standard 90.1.”
Besides earth tubes, the void also houses a tank for stormwater storage, for reuse in the building’s recycled water system.
Intervening technical changes, plus evolving environmental expectations have added demands on designers since Edmonton’s last comparable office tower took shape. But some expectations have eased, as AECOM’s Andy Smith, P.Eng., explains: “When the Commerce Place tower was designed 23 years ago, building codes had evolved to the point that seismic design and detailing was a consideration for the Edmonton region/”
An update to the building codes in 2006, however, saw this requirement substantially reduced, and for sites in the Edmonton region that receive a Class C designation, seismicity is not a design consideration.

Nordahl Flakstadt is a freelance writer based in Edmonton.