Held in cities across Canada and the U.S., Canstruction events involve teams of architects, engineers and others competing to build the most original sculptures using canned food. The cans are later ... 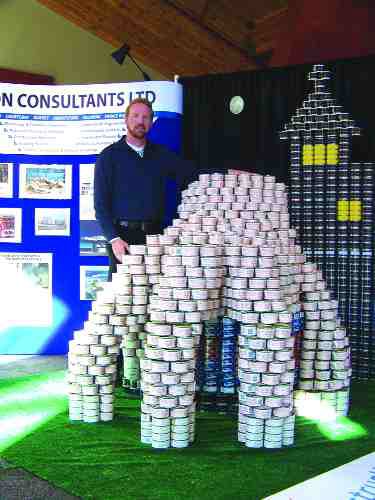 Tench with the sculpture, built with cans of salmon, ham, tuna, water chestnuts and tomato juice.

Held in cities across Canada and the U.S., Canstruction events involve teams of architects, engineers and others competing to build the most original sculptures using canned food. The cans are later donated to the local food bank.

Levelton Consultants’ sculpture “The Thing” won the Engineers’ Choice Award at Canstruction Vancouver held in Canada Place last spring. In October, the team was asked to rebuild the sculpture at the Association of Professional Engineers and Geoscientists of B.C.’s annual meeting in Whistler. Conrad Tench, a geotechnical engineer-in-training at Levelton in Richmond, B.C., was the company’s team captain.

Q. How did Levelton get involved in Canstruction?

Last year was our first go at it. It started off with about 15 people who were really keen. How it works is we get together for a couple of weekends, design the sculpture, build our templates, and then go to the event and actually build it. I was the team captain this year. The first year someone else held the reins.

Q. Is it mostly a younger crowd?

No, it’s quite diverse. Our team members range from professionals to technicians to administrative staff. Some summer students were involved. I think the youngest we had was in the vicinity of 19 years old, and the oldest was in his 60s.

Q. What was the sculpture you made this year?

It’s called “The Thing.” It is the severed hand from the Addams Family. We used in the vicinity of 4,500 cans in total. I think the hand itself was maybe 6 feet. We had an 8-foot wall behind it that had a silhouette of a mansion, and a backdrop with a moon and lighting to make things look ominous. We played a bunch of scary sounds and the Addams Family show theme. We had a smoke machine, so we had smoke all over the place. It was a lot of fun.

We got the idea because the theme of Canstruction Vancouver was “Favourite Things.” Other teams came up with ideas like snowboarding, but The Thing is my favourite thing. And if you really look carefully, The Thing is carrying a can that has tuna written on it, in different colours of cans. So the Thing’s favourite Thing is taking food to the food bank. He wants to help. We were doing a bit of a play on the words.

Q. Why do you think “The Thing” won the engineers’ choice award?

Well, we kind of played on the engineers a bit. Since it is a hand, and we figured that engineers are known by their ring, on the pinkie finger we had an engineering ring. We also designed it so that the back wrist had a really big cantilever — with no levelling devices, no glue, no supports. It was just a bunch of cans that cantilevered out about 18 inches.

Very carefully. We had one safety cable in it just in case it started to go. We planned it so that if it fell, it would have fallen backwards.

Q. So there is some engineering involved?

Oh absolutely. The first year we built a pirate ship. We designed everything in CAD, all the layers and levels. This time it was a little more complex. Trying to design the hand in CAD, we really couldn’t get a feel for how it was going to be put together, so early on we said let’s go and buy a bunch of cans and just start playing.

Q. Does the event draw a lot of people?

I believe they said there were over 25,000 people that went through the exhibit in a week.