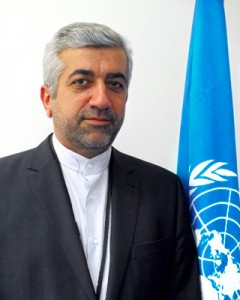 Representatives of every sector in the water resources industry were present for the World Water-Tech North America summit held in downtown Toronto, October 7-8. Leaders from government, environmental agencies, utilities and academia from all over the world gave presentations. Many presenters were from Canada, but they were also from the U.S. and as far afield as Israel, China, Denmark, Uganda and the U.K.

The topics on the morning of Day 2 were as diverse as the attendees. They ranged from presentations at the highest level of international planning, down to one on coping with leaking manhole covers.

First off was Reza Ardakanian, founding director of the United Nations University Institute for Integrated Management of Material Fluxes and of Resources (UNU-FLORES). Based in Germany (but a graduate of McMaster University in Canada), Ardakanian explained how the institute, working with academics, has developed the Nexus Observatory Platform. This is a model that enables planners to integrate data from different resources — water, soil and waste — for long term, wide-scale planning. The trade-offs can obviously benefit the environment.

Two presenters from China followed. Tianyi Wang of China Everbright Water stressed the huge potential for private investment and technology in this country of 1.3 billion. He described the astonishing expansion of wastewater and water infrastructure that has been occurring in China over the past decade, and the fact that the government is now increasingly turning to public-private partnerships.

Jing Wu, associate professor of Tsinghua University in Beijing agreed with Wang that China is facing a “very serious” problem with water pollution, thanks to rapid industrialization and urbanization. The pollution is occurring in rivers, lakes, groundwater and offshore, she said. As well, water sources per capita are low.

To ease the problems, she explained, the Chinese government has implemented a new Action Plan for Water Pollution Prevention and Control which is very strict. Introduced in April this year, the “10 Step” plan will be implemented in three stages, with the first goals set for 2020.

Five water technology companies were then invited to participate in a “Dragons Den” type presentation. Each was given seven minutes to present their technologies and then they were subjected to questions from the “dragons” — Sam Saintonge, of XPV Capital and Sangeeta Chopra of the Ontario Clean Water Agency.

Two presentations were on wastewater treatment systems from the U.S.. Jordan Lind of Clearas Water Recovery presented a patented biological system that uses algae and other nutrients to remove contaminants like nitrogen and phosphorous from wastewater. He said it is an economic “bolt-on” modular system that extends the activated sludge process. It converts the byproducts into fertilizers and plastics, with zero waste.

Tom Phillips of BCR Environmental presented “CleanB”, their patented system for treating secondary biosolids using sulfuric acid and sodium chlorite to generate chlorine dioxide. The chlorine dioxide is then injected into the sludge stream providing disinfection. It too is a “bolt-on” system, has a small footprint, a 10 minute contact time and produces no odour, said Phillips.

From Canada, Ian Woodbury presented the Riva Modelling System for asset management. It allows municipalities to plan when to renew infrastructure by consolidating disparate data (including GIS, work management and financial systems) “in a timely way.”

Kevin Mercer of RainGrid in Toronto presented their system of residential rainwater collection cisterns. The cisterns are fitted with automated real-time controls and linked to a network of other cisterns. They can anticipate future storms and release water if necessary. Municipalities are RainGrid’s target market for this “exploded tunnel” stormwater storage system.

Finally Daniel Leger of Hamilton Kent took it down to the level of drains. Manhole covers tend to become damaged and leak, he explained. Just a few small holes can allow an influx of stormwater that can overwhelm the system, or at least require treatment plants to process more water than necessary. A “mildly leaking” manhole can allow more than 125 cu.m of rainwater to enter the sanitary system each year, he said, and the chances are 10% of any system’s manholes are in that category. Twenty such leaking covers will allow enough inflow to fill an Olympic swimming pool in a year. The company’s “Lifespan” manhole solution is a composite or cast iron cover set in a locking rubber frame.

The World Water-Tech North America Summit is organized by Rethink Events of the U.K. and supported by WaterTAP Ontario, the province’s agency for encouraging innovation in water technologies. This was the third annual North American event.