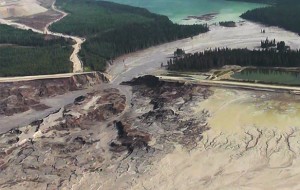 The B.C. Government has promised to introduce regulations on mine design and safety that will have a major impact on consulting engineers who work in the sector.

The announcement on December 17 by Bill Bennett, the B.C. Minister of Energy and Mines, followed closely on the release of a report by the Chief Inspector of Mines (CIM) on the Mount Polley Tailings Mine spill. There have been earlier reports by an independent panel on the causes of the disaster and the impact on the environment, which have also prompted the government to say it will tighten regulations.

Geotechnical engineers, geoscientists and hydrologists from consulting engineering firm Klohn Crippen Berger were part of the Chief Inspector’s investigative team. In an investigation that took a year and a quarter, the team conducted 100 interviews and reviewed 100,000 pages of documents.

The breach at the mine near Likely in the Cariboo region of B.C. occurred early in the morning on August 4, 2014 and unleashed contaminated water that spread down the mountains into lakes and watersheds.

The CIM report said the dam gave way because the designers failed to identify and account for a “lightly over-consolidated glaciolacustrine clay unit approximately 10 metres below the dam’s foundation.” The report stated unambiguously that: “Mount Polley Mining Corporation and the engineers of record did not conduct adequate studies and site investigations of the perimeter embankment foundation.”

At the same time, the CIM report did not find that the company or engineers had contravened any rules, precisely because there were no specific guidelines or regulatory requirements in place for investigating foundations.

This state of affairs is set to change. Following the Mount Polley disaster, the Association of Professional Engineers and Geoscientists of B.C. is set to release new professional practice guidelines for assessing and characterizing dam sites in the spring of 2016.

The CIM report outlined other problems with the dam’s structure that had led to the breach, such as a downstream slope that was too steep and an unfilled sub-excavation for a buttress at the toe of the embankment. But the report noted, “Neither of these contravened existing regulatory requirements. The steepness of the downstream slope was approved by the engineer of record to meet Canadian Dam Association guidelines for safety, and the sub-excavation was in general conformance with the design intent.”

Because it found no breach of regulations in the dam failure, the Ministry of Energy and Mines said it would not pursue legal charges. However, it also that the B.C. Conservation Officer Service is still investigating the disaster based on Ministry of Environment legislation, and that it “may find non-compliance that warrants a report to Crown Counsel.”

The CIM report had a long list of recommendations. The authors say there need to be tighter regulations for both the design and operation of mines, and that the design of tailings storage facilities should be subject to oversight by independent technical review boards.

The report also recommended that any mine with a tailings pond should have a mine dam safety manager to oversee the planning, design and ongoing management, maintenance and surveillance of the facility. It said the water balance management program should be designed by a qualified professional.

The investigative and enforcement capacity of the Ministry of Energy and Mines should also be enhanced in order to ensure compliance with regulations, said the report.

To read the B.C. Ministry of Energy and Mines press release with a link to the Chief Inspector of Mines report, click here.