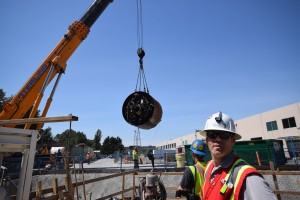 What’s been called “the biggest water infrastructure project ever attempted in Metro Vancouver” is under way to build a new watermain under the Fraser River.

The Port Mann Water Supply Tunnel is a $240-million project to replace a 40-year old crossing that was damaged by river scour. The new tunnel is west of the new Port Mann Bridge, 60 metres below the river bed, and 80 metres long.

After almost 17 months of burrowing between Coquitlam and Surrey, the tunnel boring machine “Squirrel” was pulled out of the north shaft this summer.

Work is now proceeding to insert a welded steel water main of 2.1 metres diameter inside the 3.5-m diameter tunnel. Valve chambers are being constructed on top of each 60-metre vertical shaft to allow the system to be connected to the existing Metro Vancouver transmission system by the Fall of 2016.

The tunnelling process took longer than expected due to the underground conditions. McNally Aecon were the contractors. In a video, project manager Andrew Ruhe explains that they encountered difficult ground pressures and mixed soils including tills, clays, “cobbly ground” and boulders. Nonetheless the boring machine hit target within an inch. Ruhe said they were “pretty pleased” with that.

The shafts for the tunnel are in Coquitlam’s Maquabeak Park in Coquitlam and the CN Thornton Yard in Surrey to the south.

To watch a video about the project and the extraction of the tunnel boring machine, click here.