Researchers at the University of Waterloo invent solution that uses paper strips, similar to those in litmus tests, to identify deadly E. coli.

Researchers at the University of Waterloo have invented a fast, affordable way to test drinking water for potentially deadly E. coli.

Unlike current tests that cost about $70 and can take up to three days to get back from the lab, the Waterloo invention uses paper strips similar to those in litmus tests to produce results in less than three hours at a cost of 50 cents. 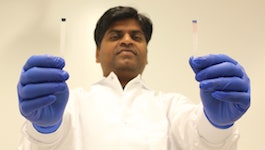 “This has the potential to allow routine, affordable water testing to help billions of people in the developing world avoid getting sick,” said Sushanta Mitra, executive director of the Waterloo Institute for Nanotechnology.“It is a breakthrough.”

Now being refined by Glacierclean Technologies Inc., a startup company co-founded by Mitra, the test could also improve water safety in remote or rural areas of the developed world and greatly reduce testing costs for municipal treatment systems.

Researchers targeted E. coli—the culprit in a deadly outbreak in Walkerton, Ontario in 2000—because it is an indicator organism of water contamination.

The bottom of the paper strip developed by Mitra and his colleagues is laced with sugar, which begins to dissolve when placed in water. E. coli bacteria are attracted by the resulting sugar trail and get trapped in the porous paper when they come in contact with it.

As water enters the paper, it carries the trapped bacteria into an area of the strip containing a mixture of chemicals. The E. coli react with those chemicals and turn the strip pinkish red to signify a positive test.

Glacierclean, which already sells mobile water kits to detect E. coli for about $5 a test, hopes to have its strips, known as the DipTest, on the market within nine months.

“Simple ideas create paradigm shifts in technology and this is a simple, frugal innovation,” said Mitra, also a mechanical and mechatronics engineering professor at Waterloo.

Mitra’s research—done in collaboration with Naga Siva Kumar Gunda, a post-doctoral fellow and co-founder of Glacierclean, and former master’s student Saumyadeb Dasgupta—appears in the journal PLOS ONE.