Bridge to be a signature structure that changes Edmonton's skyline 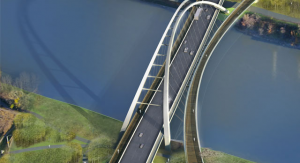 Construction of the new Walterdale Bridge in downtown Edmonton hit a major milestone in January when one of a pair of central steel arches was hoisted into place.

The 950-tonne arch had been floated out into the North Saskatchewan River in November, then on January 19 the massive steel structure was raised 15 metres over six hours by four jacks. The steel arches rest on two thrust blocks on the river banks and rise 56 metres high. The installation involved fixing over 6,000 bolts. The second arch segment on the new bridge is due to be lifted into place in March.

Being called a signature project that is changing the skyline of the city, the new project replaces the existing 100-year old Walterdale bridge just to the west, which will be dismantled. The bridge was named after an early settler, John Walter, who operated a ferry over the North Saskatchewan River at the location.

Construction on the new bridge began in 2013 and is now expected to be completed in 2017.

Consultants on the project are: ISL Engineering and Land Services – prime consultant;

To watch a video of the arch being lifted in January, click here.

To find out more information about the project, click here.