Union Station “dig down” below viaduct moves into complex phase 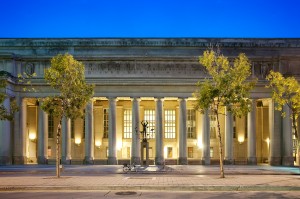 Work has started on what’s been called “one of the most challenging jobs in the world” in engineering and construction. This past weekend the Bay Street GO Transit Concourse at Union Station closed and the hoardings went up in preparation for another “dig down.”

Union Station in downtown Toronto is the busiest transit hub in Canada, with over 200,000 people using it each day. They pass through to catch suburban commuter GO trains, VIA passenger trains or to access the Toronto subway system next door.

As part of a host of massive renovations being done in and around the station, the project involves digging a second retail basement below existing concourses that lie on both sides of the 1920s beaux-arts rail station.

What makes the engineering complicated is that the existing concourses are column structures, or viaducts, and they support the train tracks and a five-storey wing of the station head house.

NORR architects and engineers are the prime consultant for the project, acting as architects, structural, mechanical and electrical engineers.

Hassan Saffarini, P.Eng., lead structural engineer for NORR, says that the work on the Bay concourse is similar to the work they did on the York concourse, but “goes well beyond that.”

Now, as Saffarini explains, they are moving into the most complex stage. “To date [stage I] all the dig-down has taken place underneath the one-storey viaduct structure. A significant portion of the stage II dig-down occurs under the five-storey east wing of the head house. Removing the columns of this steel framed building cannot be done by simply shoring the lowest floor. In fact, each floor would need to be shored down to bedrock before the columns could be cut safely.”

The alternative, which was selected, he says, is to “grip the columns from the bottom, jack the entire building and cut the columns below the grip point.” The approach was used 15 years ago in San Francisco City Hall, “a building of the same vintage and almost identical structural system.” But, he points out, “The objective was different there, as 530 columns were cut and temporarily jacked to install seismic base isolators.”

Inspired by the San Francisco example, NORR contacted the sub-trade that carried out the jacking. They then developed the detailed design for Union Station.

Once the old foundation is cut and excavation has been made,” Saffarini explains, “a new steel column will be spliced to the underside of the old and full continuity will be ensured. Additionally the old and new will be encased in reinforced concrete, creating a composite column.”

The concourse expansions are due to be completed in 2017. Richard Coveduck, head of design and construction for the City of Toronto, which owns the station, said the project is “one of the most challenging jobs in the world,” in an interview in the Toronto Star.

During the construction, Toronto GO Transit commuters are being diverted through the completed York concourse to catch their trains. The new concourses are much brighter than the 1979 predecessors and once both are open, the total space will eventually be three times more than the existing concourses, expanding from 40,000 sq. ft. to 60,000 sq.ft.

Another major component of the Union Station revitalization is the refurbishment and alterations to the Bush Train Shed roof over the railway tracks. Designed by Zeidler Partnership, the project involves restoring some of the original historic steel structure, but also replacing the central part of the roof with a huge 70-m x 94-m glass atrium. The roof has suspended glass louver walls along the sides that allow for ventilation but keep out rain.

Saffarini wrote a detailed article about the work they are doing on the Go Transit concourses in Canadian Consulting Engineer’s March-April 2015 issue. Click here. 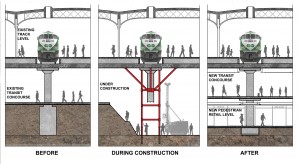