The second of two tunnel boring machines was lowered into a shaft last week to construct the pedestrian tunnel that will take passengers from downtown Toronto to Billy Bishop Toronto City Airport. The 1930s-era airport on Toronto Island has... 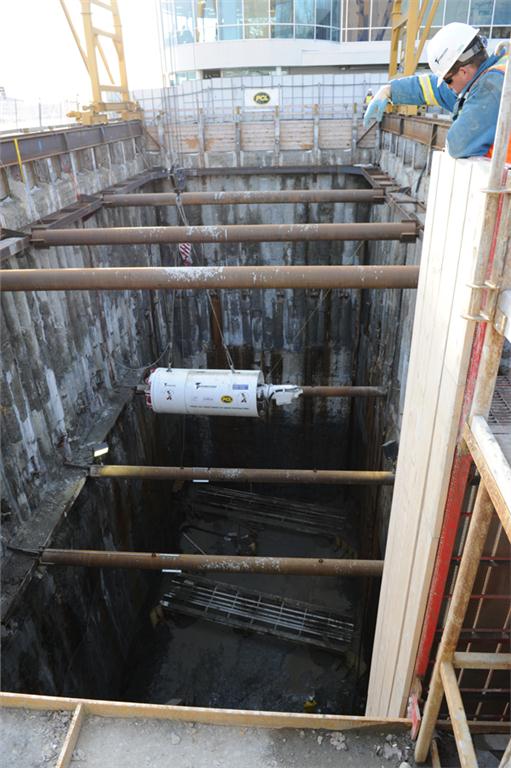 Tunnel boring machine "Chip" being readied to begin boring one of seven "drift" tunnels which will form part of the crown over the pedestrian tunnel at Billy Bishop Toronto City Airport.

The second of two tunnel boring machines was lowered into a shaft last week to construct the pedestrian tunnel that will take passengers from downtown Toronto to Billy Bishop Toronto City Airport. The 1930s-era airport on Toronto Island has grown increasingly busy in the last few years and is now serving more than two million passengers travelling to eastern Canada and the U.S. Travellers currently have to take a short ferry ride across the Western Gap to get to and from the airport.

The TBMs “Chip” and “Dale” are not tunneling for the main passage that passengers will walk through, but rather for seven smaller “drift” tunnels that will form the passageway’s arched roof. Arup Canada, who are the engineers for the design-builder PCL, came up with the innovative design, explains Ken Lundy, P.Eng., director of infrastructure for the Toronto Port Authority which owns the airport.

The main pedestrian tunnel is 10.8 metres in diameter and 244 metres long. It will carry four moving sidewalks that travel around 2.3 Km/h. This tunnel is being dug using traditional mining excavation methods. The bottom lies 30 metres below the Western Gap, sitting under 10 metres of rock and riverbed and 10 metres of water.

The smaller tunnels – each 1.8 metres in diameter – will be interlocked and concreted to create a roof that is designed to reduce the potential for water ingress during construction. Three of the drift tunnels will carry water and wastewater service pipes to the island.

The seven smaller tunnels are being dug by the two 90-tonne TBMs. Each of these machines is 11 metres long, and moves up to 15 metres per day.

The walkway is being built as a public-private partnership and is expected to be completed by the spring of 2014.

A few years ago plans were made for a bridge to span the Western Gap to the airport, but this was voted down by the city politicians. Dillon Consulting helped produce a striking bridge design, but this plan was abandoned due to political opposition. Dillon and NORR helped produce the reference design for the tunnel scheme.