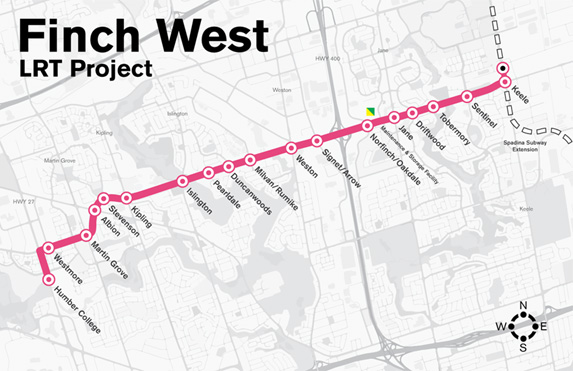 Up to $333 million in federal funding for the Finch West Light Rail Transit (LRT) project was announced on June 23, marking a boost to the project, which represents a $1.2 billion investment by the Government of Ontario to expand and improve transit in the City of Toronto.

The Finch West LRT will include the design and construction of 11 km of light rail transit line along the surface of Finch Avenue. The rail line will run from the new Finch West Subway Station on the Toronto-York Spadina Subway Extension at Keele Street to Humber College.

The project will also build 16 surface stops, a below-grade terminus stop at Humber College, an underground interchange station at the TTC’s Finch West Subway Station, and a maintenance and storage facility for the light rail vehicles.

The LRT will connect to GO Transit bus services and Mississauga and Brampton local bus services.