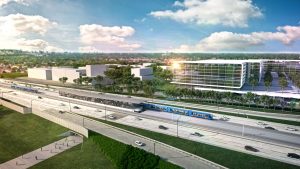 Two consortia have been qualified to bid on the engineering for the massive Réseau électrique métropolitain (REM) transit project in Montreal. On November 10  CDPQ Infra, the infrastructure subsidiary of Caisse de dépôt et placement du Québec, announced that Groupe NouvLR and Kiewit-Eurovia would be invited to submit proposals for the infrastructure engineering, procurement and construction (EPC) contract for the 67-killometre light rail network.
The electric, fully automated network will have sections at grade, elevated and underground, with 24 stations and four branches.
The Groupe NouvLR team involves SNC-Lavalin, Dragados, Aecon, Pomerleau, EBC and AECOM. The Kiewit-Eurovia team includes Kiewit, Eurovia, WSP and Parsons.
A second set of consortia has been qualified to submit proposals for the rolling stock (200 cars), systems, operation and maintenance (RSSOM) contract.
The call for proposals is due to be issued this week, and the qualified companies have about six months to submit their plans. Construction is expected to start in the spring of next year. An independent auditor, Knowles Consultancy Services was mandated to monitor the integrity of the application analysis and ensure transparency, and there was a rigorous system for the selection.
There were three evaluation committees, consisting of internal and external evaluators: a technical review committee, a financial review committee, and a legal review committee. A fourth committee, the clarification committee, was also formed to analyze the requests for clarifications submitted by the consortia. The committee had to ensure that such requests were indeed requests for clarifications and not requests for supplementary information.
After reaching consensus the committees sent their reports to the independent auditor and the selection committee which then qualified the applications that obtained the highest scores, and submitted a report to CDPQ Infra’s board of directors who ratified the teams. Then once the qualification process was completed, the independent auditor provided the following: “unconditional assurance: ln our professional opinion, the qualification process has been conducted with probity, in a fair, open and transparent manner.”
The same day CDPQ Infra also published a complete ridership study for the REM.
The study projects that by 2021 the morning rush-hour ridership on the REM will be 44,120, while daily the network is expected to carry 120,440 people. CDPQ said the additional data in this study confirms their earlier results and assumptions, and “is an important element in the call for proposals and project financing.”
For the rolling stock, systems, operation and maintenance service contract, the three consortia that have been qualified are: Alliance Montréal Mobilité (Parsons, Hyundai, RATP, Thales); Bombardier Transportation; and Groupe des Partenaires pour la Mobilité des Montréalais (Alstom and SNC-Lavalin).