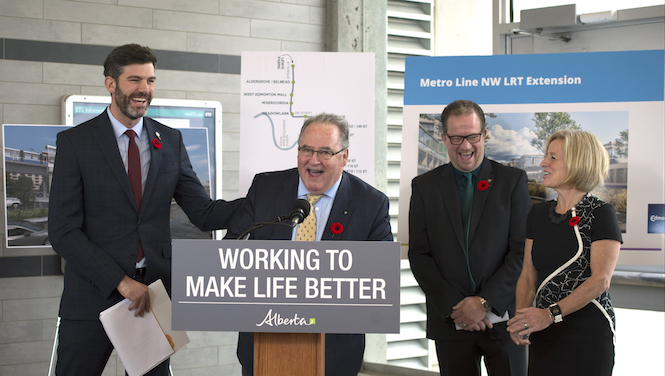 The Alberta government has announced that it is investing $1 billion, or 40%, of the city’s expected $2.6-billion Valley Line West LRT expansion cost. This is in addition to the province’s commitment to the city’s Metro Line which totals $131 million of the $328-million project.

The Valley West route expansion will move some 60,000 Edmontonians between downtown and Lewis Estates every day, providing a faster commute. The Metro Line expansion will run from NAIT to the new Blatchford community, serving thousands more commuters daily.

The finished routes will bring suburban communities and the city’s core together, with connections to LRT and bus routes covering the entire city. The 14 new stops include West Edmonton Mall, the Misericordia Hospital and the Brewery District.

“We are planning and building a city for more than a million people, and with commute times getting longer each year, now is a critical time in Edmonton’s growth to ensure we have a robust transit network in place,” said Don Iveson, mayor, City of Edmonton, in a media release.